A Shot to the Eye – Fire Hydrant Failure 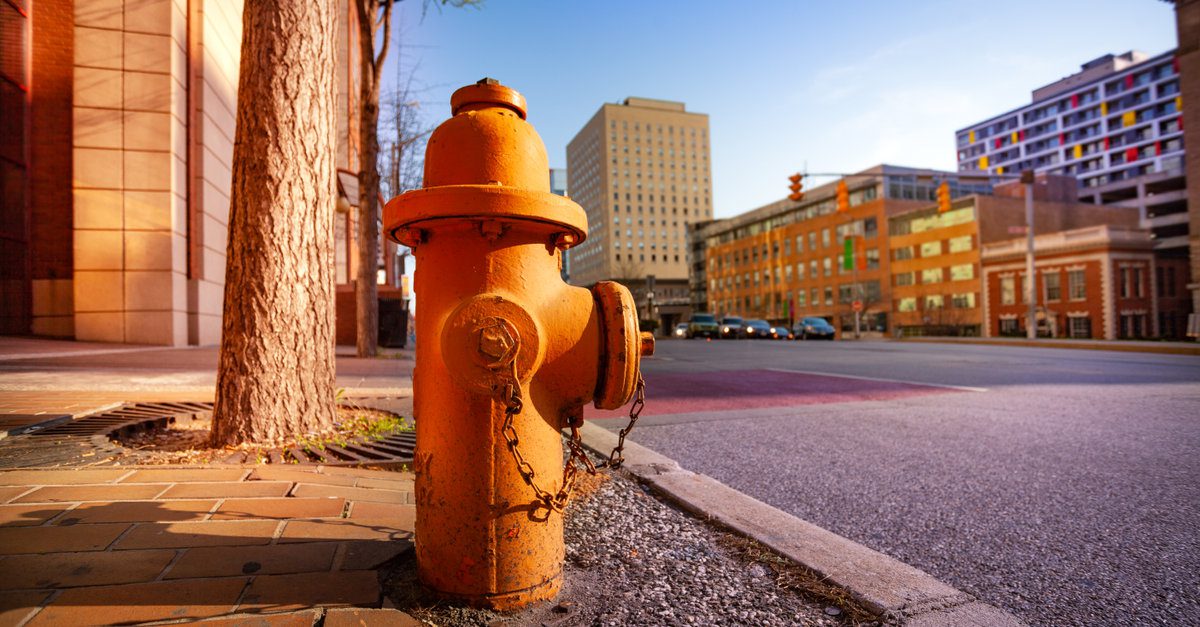 John R. Yannaccone, P.E., Principal Mechanical Engineer
Incident Description: A water authority worker performed flow testing of a fire hydrant to measure flow rate and pressure. After gathering the measurements, the worker was shutting down the hydrant with a wrench by rotating the valve stem. As the valve was being closed, the worker was struck in the eye with an object that displaced and damaged his safety glasses, resulting in a serious injury and loss of vision in his eye. Following the incident, a screw which was used to secure a weather cover to the top of the hydrant was found, dislodged.
Expert Analysis: There were two questions related to this incident: why did the screw separate from the top of the hydrant and where did the energy to propel the screw upward at a high velocity come from? The screw used to hold the weather cap in place protects the bearings on the valve from dirt and water, and should not be under any load under normal conditions. Inspection of the screw showed it was not broken but that the threads were corroded, which reduced their engagement with the top of the valve stem. While this would decrease the strength or holding ability of the screw, under normal operating conditions there is no force to cause it to separate from the valve.
The lower side of the screw is exposed to an upper chamber in the hydrant which is intended to remain dry and should not see any pressure when the hydrant is in use. Witness reports following the incident indicated there was water shooting upward from the hole the screw had dislodged from until the hydrant was turned off. Review of the hydrant design showed the upper chamber is separated from the lower chamber by a series of O-rings on the valve stem. Wear and degradation of these O-rings resulted in water passing from the lower chamber into the upper chamber, compressing the air in the sealed upper chamber. This pressure was applied directly on the bottom of the screw and once the force exceeded the holding force of the degraded threads, the screw was expelled from the top of the hydrant.
Several factors combined to cause this incident to occur. The hydrant manufacturer had specified the use of steel screws to attach the weather cap, even though most other manufacturers specify stainless-steel screws be used, which are more corrosion resistant. A stainless-steel screw would have prevented degradation and maintained the ability to stay attached to the hydrant when subjected to pressure inside the hydrant. The second issue was created by the water passing by the O-rings, pressurizing the upper hydrant chamber, which could not be detected while the hydrant was in use. Additionally, the manufacturer’s instructions for maintenance of the hydrant did not specify replacement of the O-rings. Had the O-rings been maintained, they would not have allowed water to pass into and pressurize the upper chamber. A second option would have been for the manufacturer to have designed a small vent hole from the upper chamber to the outside of the hydrant. This would have served two purposes: it would have prevented the pressure in the upper chamber from building and it would have provided a weephole for water, indicating the failure of the seal between the upper and lower chambers and the need for service. By preventing the upper chamber from being pressurized, there would be no force to propel or fire the screw out of the top of the hydrant.
Both the design changes or an O-ring maintenance instruction would have prevented the failures that resulted in the screw being shot upward into the worker’s eye and thus, his resulting injury.
Result: The case settled during negotiation of the parties.
John R. Yannaccone, P.E., Principal Mechanical Engineer with DJS Associates, Inc., can be reached via email at experts@forensicDJS.com or via phone at 215-659-2010.