Christian G. Westring, Ph.D., Forensic Geneticist
A DNA profile can simply be regarded as a list of numbers similar to a phone number. While the individual numbers used in any given telephone number are not unique, the specific order of each number makes each telephone number unique. Similarly, DNA testing relies on identifying the number of repeats (known as alleles) at 20 or more locations (known to scientists as loci) – that can provide statistics of 1 in nonillion (30 zeros) or more. 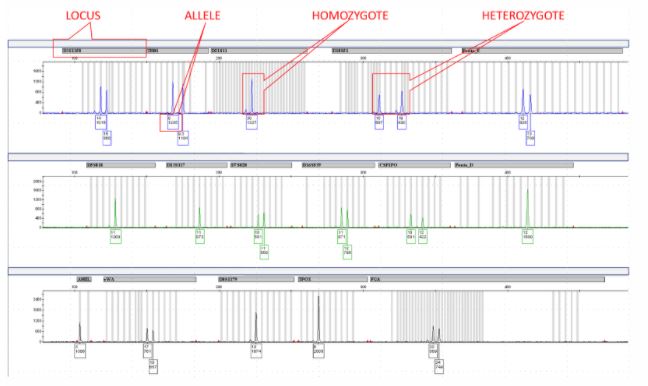 The genetic structure that contains the DNA of interest here are known as chromosomes. In humans, these chromosomes are inherited as 23 unique sets (including the sex determination chromosomes, X and Y), one chromosome inherited from mom, one from dad. The loci we employ in forensic DNA testing are distributed throughout these 23 sets of chromosomes. The number of repeat units at each locus varies from person to person, and is inherited from each parent (barring mutation, of course). Hence, we would anticipate seeing two “peaks” at each location, one from mom, and one from dad. In the event the number of repeats is the same length, it would be seen as a single peak, known as a homozygote, which is made from both parents. 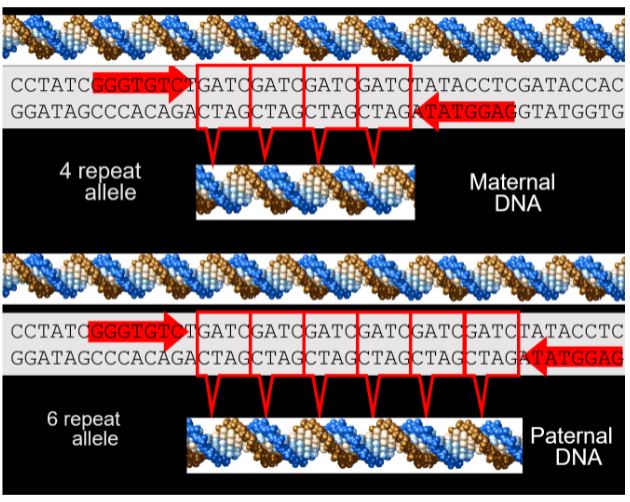 In order to determine the number of repeats at each locus, laboratory analysts extract DNA from the sample of interest using a variety of chemicals that removes the DNA from other cellular components. The DNA STR profile is generated through a heating and cooling process known at the Polymerase Chain Reaction – where the sample is later separated by size by an electric current – a process known as electrophoresis. In the figure above, we see two sets of alleles – a “four” that was inherited from mom, and a “six” that was inherited from dad. Based on size, the four allele (which is smaller), will migrate faster than the six during electrophoresis. These differences in size and mobility through the gel matrix is what allows forensic scientists to differentiate DNA fragments based on size. This same concept applies to all 20-plus loci which we commonly encounter in forensic applications. 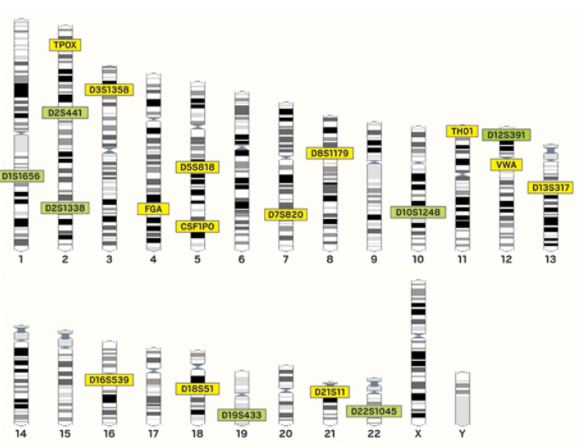 In 2017, the FBI expanded the original 13 core loci (highlighted yellow) in the Combined DNA Index System (CODIS) databases and expanded to 20 loci (highlighted in green). Credit: National Institute of Standards and Technology.
Learn more about DNA applications here: Modern DNA Applications: Who was the Driver?
Christian G. Westring, Ph.D., Forensic Geneticist with DJS Associates, Inc., can be reached via email at experts@forensicDJS.com or via phone at 215-659-2010.