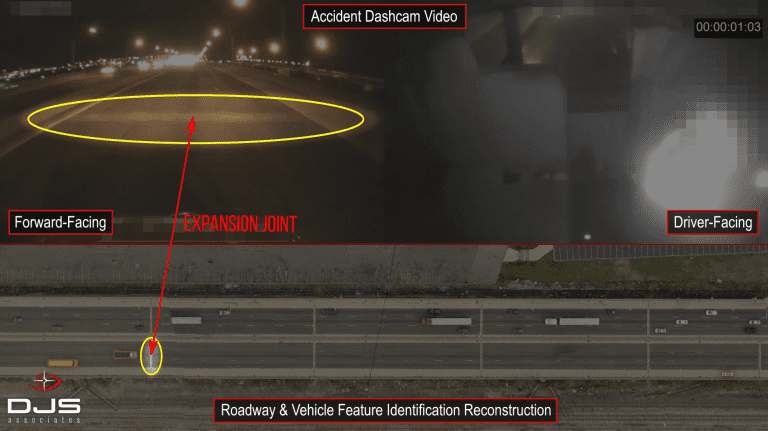 DJS Associates, Inc., was retained to analyze dashcam footage of a collision involving a tow truck that was dispatched to assist with a vehicle located on the right shoulder of the roadway due to mechanical difficulties. Prior to the collision, the tow truck traveled in the middle of three lanes, and as it approached its destination merged into the right lane. For whatever reason, a school bus traveling in the right lane failed to slow and yield to the tow truck entering its lane of travel, and instead drove onto the shoulder. Just as the bus passed the tow truck, it failed to notice the handicapped vehicle, and impacted the stopped car with devastating effect.

Without access to the site of the collision to perform a detailed inspection with DJS 3D laser scanning and/or drone equipment, we relied on a Google aerial photo of the site in order to plot the vehicles in the roadway. Prominent features in the forward-facing dashcam footage, such as the skip lines and expansion joints, were identified and matched to their locations in the aerial image. An accurate placement of the tow truck was established based on these features. Next, the driver-facing dashcam footage was inspected to identify the location of the school bus. The bus was positioned based on when its headlights became visible in the video and their relative position to the rear of the tow truck. Again, the bus was positioned when the front of the chassis became visible in the forward-facing dashcam video. This process of pulling visual cues from both views of the dashcam video was valuable in gaining insight into the circumstances of this accident.