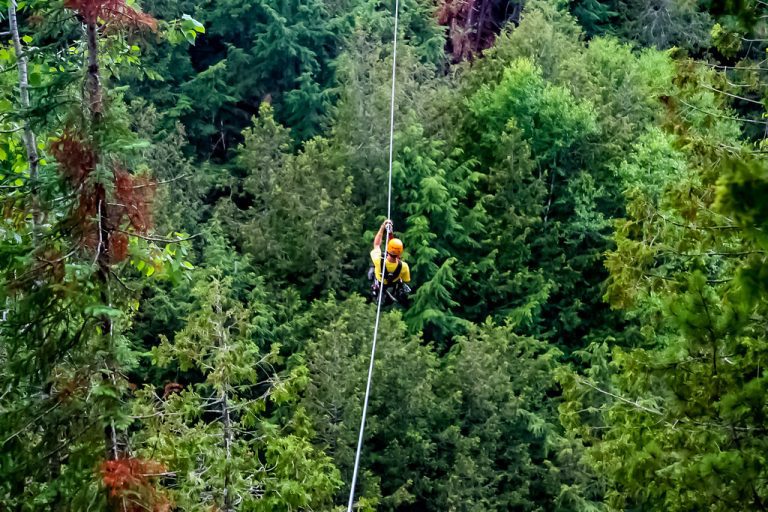 Case Synopsis: An employee of an outdoor adventure facility was participating in an in-house training scenario where the employees were to complete a rope course. One of the obstacles involved a giant swing that used a carabiner to connect the participant’s harness to a swing line attached to two trees. A second line was connected to a quick release and was used to pull or haul the participant approximately 25 feet up. The participant pulled a small rope to actuate the release mechanism, which dropped the haul line and allowed the participant to swing from the swing line.

Several other participants had safely used the giant swing on the day of the incident prior to the plaintiff’s turn. When it was his turn, the plaintiff went to the bottom of the swing where the operator (another employee) connected the two lines and the plaintiff was hauled up. When the plaintiff pulled the release rope, he was completely discharged from the swing and fell approximately 25 feet to the ground where he sustained serious injuries.

Expert Analysis: The information available was limited, but indicated that all the ropes, hardware and attachment points were still intact and functional after the incident. Review of the configuration of the giant swing indicated that the participant’s harness should be connected to the swing using a locking carabiner. This carabiner was to be attached to a link on the swing where the quick release mechanism was also attached. A photograph of the ropes immediately following the incident showed the haul line was still attached to the bottom of the swing by the carabiner.

The engineering investigation into this incident determined the operator had inadvertently connected the plaintiff’s harness to the quick release mechanism and used the carabiner to attach the haul rope to the swing. When the participant pulled the quick release to initiate swinging, the connection error resulted in him being released from all the ropes, plummeting to the ground.
While the connection error caused the plaintiff to be released and fall to the ground, an engineering analysis revealed several issues with the design of the swing system. Both the connection of the participant to the swing and the connection of the haul rope were made to the same location on the swing. This not only made it easy for the operator to make an error while connecting a participant, but also made it difficult to see if an error was made. The risk of making this incorrect connection was clearly a hazard which could lead to a serious or fatal injury. This hazard should have been identified when the swing was designed and resolved in the final design. Several technical and economically feasible alternative designs were identified as part of the engineering investigation into this incident.

Result: The case was presented to an arbitrator who found against the company that designed and installed the swing without any comparative fault by the plaintiff.

John R. Yannaccone, PE, is a Senior Mechanical Engineer with DJS Associates and can be reached via email at experts@forensicDJS.com or via phone at 215-659-2010.