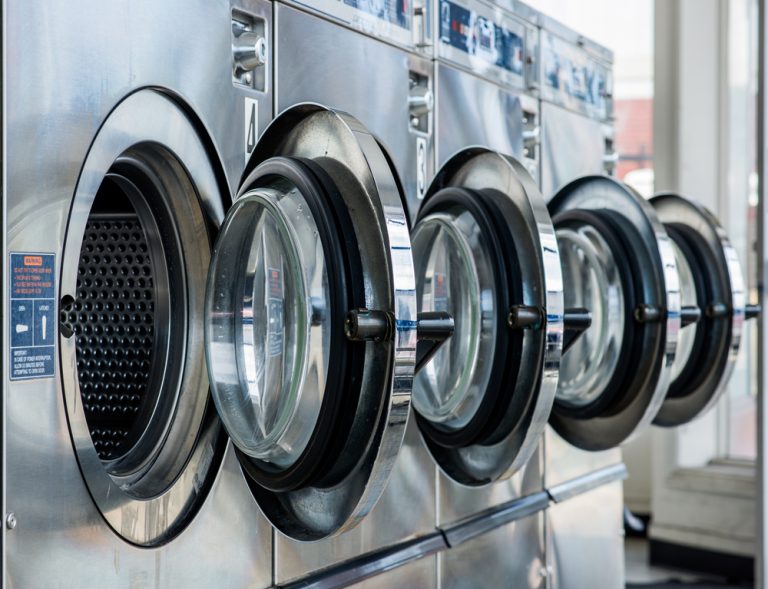 Case Description/Summary: A laundromat patron approached the facility’s side entrance door from the exterior. After opening the door, she tripped on a 5-gallon cigarette bucket as she attempted to move out of her partner’s way into the building. The plaintiff’s expert alleged that the presence of the cigarette bucket at the incident location was due to the laundromat owner’s negligence and that the bucket infringed on patrons’ ability to egress the facility during emergent situations and hence violated the fire code.

Expert Analysis: A trip and fall expert was engaged by counsel for the defendant’s insurance company. A site survey was conducted just over 3 years after the incident to gather evidence on behalf of the defendant. Data collected during the site inspection led to the identification of the required means of egress pathway, necessary to comply with the adopted International Fire Code (IFC). The IFC defined “MEANS OF EGRESS. A continuous and unobstructed path of vertical and horizontal egress travel from any occupied portion of a building or structure to a public way. A means of egress consists of three separate and distinct parts: the exit access, the exit and the exit discharge.” IFC Section 1030.2 stated: “Reliability. Required exit accesses, exits or exit discharges shall be continuously maintained free from obstructions or impediments to full instant use in the case of fire or other emergency when the areas served by such exits are occupied.”

Field measurements were taken of the egress door’s swing and the position of the cigarette bucket at the time of the subject incident. The bucket’s position was determined from security videos taken at the time of the incident. These measurements determined that the bucket was located outside of the IFC’s requirement to keep the means of egress pathway clear of impeding objects through the exit way when its door was opened to only 90 degrees from its closed position (see the photo below).

The plaintiff also alleged that one of the exterior door’s two push bars came off of the door as she attempted to arrest her fall after the trip. The above security image refuted that allegation, as it could be seen clearly subsequent to the incident, that both were still present. 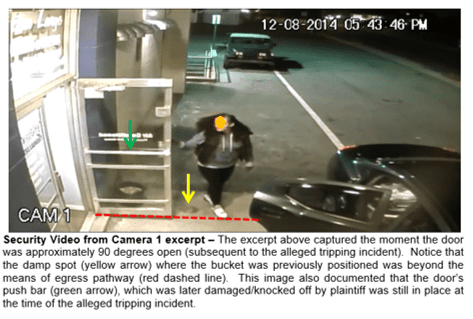 Trial testimony given by the trip and fall expert for the defense pointed out that the cigarette bucket had been placed by the owner approximately 20 feet away from the entryway, so that patrons’ smoke would not be drawn into the doorway. While the owner found on several prior occasions that patrons had moved the bucket to the door location, to use it as a door stop when they were bringing in or out their laundry, he moved it away again to prevent the smoke infiltration issue. As the sand-filled bucket weighed approximately 50 pounds, the owner felt that most patrons inclined to move it again wouldn’t be able to lift it. The facility was found to have an automatic door locking feature which activated the laundromat’s nighttime door lockdown, the placement of a door block device (such as the incident bucket) would defeat this security feature and necessitate the owner’s visit each time. The owner only visited the facility on average of twice a week, so additional visits to lock the doors at night would create unnecessary work on the owner’s part. These facts established that the owner did not have actual or constructive notice of the cigarette bucket’s position at the time of the incident. The defense’s expert also pointed out that the plaintiff’s vehicle was not legally parked at the time. Had it been properly placed in either the front or rear parking lots, the plaintiff would have most likely seen the cigarette bucket as she walked from either of those two areas to the incident door.

Result: The plaintiff’s trial resulted in a defendant’s decision.

Bryan J. Smith, P.E., Construction Site Safety/Slip, Trip and Fall Expert with DJS Associates, Inc., can be reached via email at experts@forensicDJS.com or via phone at 215-659-2010.