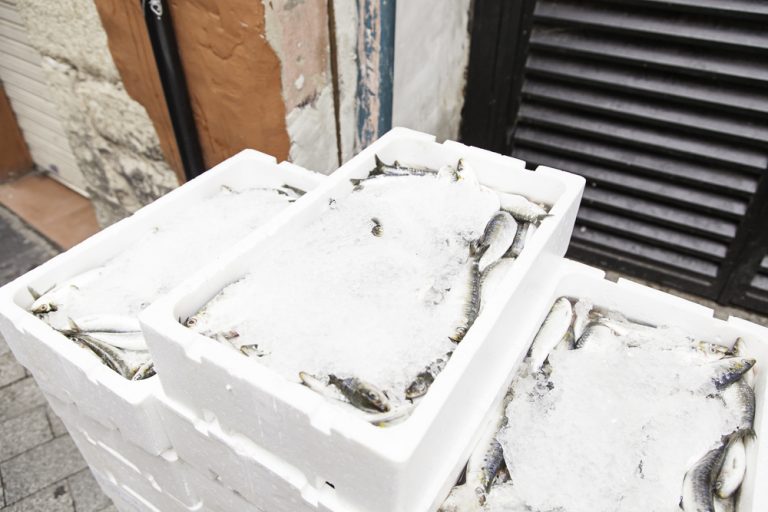 Case Description/Summary: While preparing for an annual festival, the plaintiff, a temporary employee of the property owner, was helping a frozen fish delivery person load the delivered products into an exterior walk-in cooler. The plaintiff loaded frozen fish boxes onto a cart and he intended to pull the cart up the cooler’s interior metal ramp so that he didn’t have to carry each individual box. He never looked down at the ramp floor before stepping upon it.

The plaintiff’s walking actions were not those of a normal pedestrian, just walking upon a flat, level surface. He was on a sloped ramp that was 8.3% sloped from the normal plane (a moderately slight incline from a horizontal plane). Under normal walking conditions, this slope would be considered shallow and far from being excessive – even for pedestrians with walking difficulties. The steeper a slope is, the more a pedestrian standing on it will have his weight (see black arrow in the illustration below) act to affect a slide down the ramp. This is because when weight is applied to a sloped surface, a portion of the weight vector will go “normal” (perpendicular – see yellow arrow) to the ramp’s surface. The remaining force vector of the weight would be applied parallel (see green arrow) to the sloped surface. 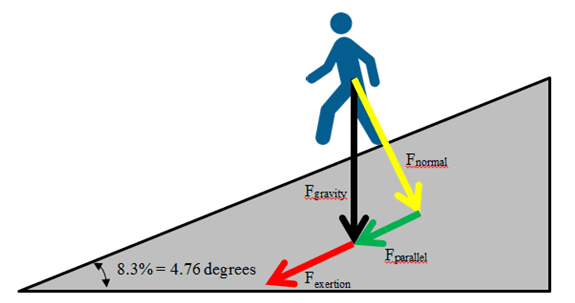 What this means is that a portion of the plaintiff’s weight acted to help him slide down the ramp. This is what happens when just standing still on the ramp. When a person is walking on the ramp, other forces are then at work. The plaintiff wasn’t just standing or walking on the cooler’s ramp. He was pulling with all the strength that he could muster, to make the cart’s wheel climb over the threshold of the cooler. The cart, overloaded with 400 or more pounds of dead weight, had to be forced to climb the threshold by the plaintiff before its wheels could begin to roll on the ramp’s surface. This exertion by the plaintiff acted to greatly increase the parallel forces (see red and green arrows combined) at play and made the COF between his footwear and the ramp surface become extremely critical. If the plaintiff’s foot/feet actually slid at that point, it was because the combined forces of the parallel component of his weight, acting upon the ramp’s sloped surface and the force of his exertion to move a stopped/stuck 400 pound cart exceeded the available traction afforded by the ramp’s surface. This could occur regardless of the ramp’s COF. Additionally, a prudently cautious pedestrian would have looked at an unknown walking surface before walking on it. This was his sole personal safety responsibility – not that of his employer.

Expert Analysis: A site survey was conducted approximately a year and a half after the incident to gather evidence. Still photos were taken as well as slope measurements. The evidence showed that the incident ramp flooring complied with industry standards. The plaintiff chose the method of pulling the cart up the ramp by himself instead of pushing it; asking the driver to assist him; or carrying individual boxes into the cooler. The plaintiff’s poor choice resulted in his unsafe actions and greatly contributed to the proximate causation of his incident. The property owner achieved all of their duties and responsibilities in that they attained compliance with all applicable codes, regulations, etc., during their ownership and/or operation of the incident walk-in cooler. The property owner was not responsible for the causes and decisions made by the plaintiff which directly led to his alleged slip and fall incident.

Bryan J. Smith, P.E., Construction Site Safety/Slip, Trip and Fall Consultant with DJS Associates, Inc., can be reached via email at experts@forensicDJS.com or via phone at 215-659-2010.