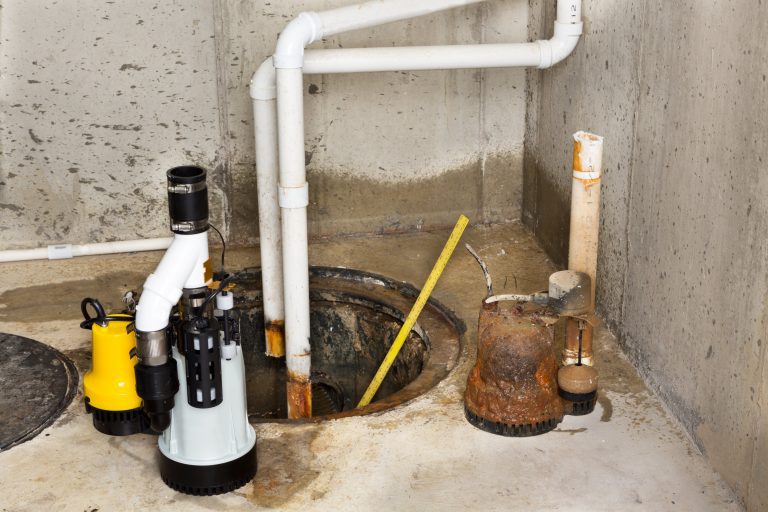 Case Synopsis – A homeowner previously installed a basement sump pump system for the removal of storm water. The system consisted of a float-operated AC-powered motor-driven centrifugal pump, which was mounted in a below ground sump tank. The discharge piping from the pump was run through the sump tank cover, and vertically through 1½” PVC piping and check valve (to prevent reverse flow runback) to an elevation of about 8 feet above the basement floor. From this position, the pump discharge piping was run across the basement ceiling to the interior basement wall, and from there to the outdoors.

In early February 2014, the owner decided to upgrade the system with a backup pump, which would activate automatically upon the loss of AC power to his home. The owner hired a plumbing contractor to install the backup system. Beside the installation of the backup pump and the associated appurtenances, the contractor was required to integrate the new system with the existing pump and system. As reported, the modified system was later completed and tested with both pumps operating independently and jointly in a combined system arrangement.

While on vacation in June 2014, a storm occurred, and the basement flooded. It was determined that the basement flood was attributable to a total failure of the sump pumps’ (both main and backup) systems. The owner called a restoration contractor to pump out the water and perform a quasi-cleanup of the basement. The owner notified the plumbing contractor and his insurance company of the flooding incident, and the parties later met to discuss the cause of the event, assess the extensive damage to the basement, and begin the massive cleanup.

Expert Analysis – After the incident, it was determined that a loss of AC power caused the main AC motor-driven pump to be non-operational, but the backup Jet Pump should have functioned to remove the flood water. Since the Jet Pump also failed to operate, an inspection of the check valves and piping was performed. It was determined that the main pump check valve rubber flapper had failed to open, and this allowed storm water from the Jet Pump discharge piping along with the domestic (actuating) water to flow backward into the main pump discharge piping, and ultimately into the sump. This was made possible because of the interconnecting Y-Fitting, highlighted in Photo A. Although it is believed a small portion of the water flow from the sump pumps system did exit the system to the outdoors, the primary path of least resistance must have been backward through the main pump and into the sump tank in order to have caused an accumulation of 19,000 gallons of water in the basement. It was estimated that storm water alone, caused by the failure of both pumps, might have resulted in a level of 2 feet of water (about 7,500 gallons) in the basement, much below the 19,000 gallons that accumulated in the basement.

Conclusions – It was reported that the plumbing contractor had been previously certified for the installation of water-powered sump pumps and had installed several of these type pumps for other users in the past. His credentials had been purportedly verified by the owner, and, as a result, this plumbing contractor was awarded the contract to upgrade the sump pumps system. As far as was known at the time, there were no problems with any of his previous systems.

It was understandable at the time of the flooding incident that all the parties involved would focus on the failed check valve as the obvious main cause with little consideration of other issues. Meetings were held with the check valve manufacturer to discuss the failure mode of the check valve and the cause of the failure, so it was determined that check valves with a higher – pressure rating would be installed and would solve the problem, which occurred with the low pressure rated check valve. So, this was the action that was taken, and it was believed that should a similar situation occur in the future, the higher – pressure rated check valve would prevent a repeat of backflow into the sump tank, which resulted in the basement flooding incident.

The plumbing contractor was, evidently, not familiar with the code, and most assuredly had not installed previous systems in compliance with the code. Furthermore, none of the other parties involved at the time had no apparent knowledge of the existence of the code. The plumbing contractor had been fortunate that he had not experienced other flooding incidents in the past, especially if he had employed low pressure rated check valves in those instances.

James J. Shields, P.E., Mechanical Engineer with DJS Associates, Inc., can be reached via email at experts@forensicDJS.com or via phone at 215-659-2010.