Captain Video and the 3 Car Scenario 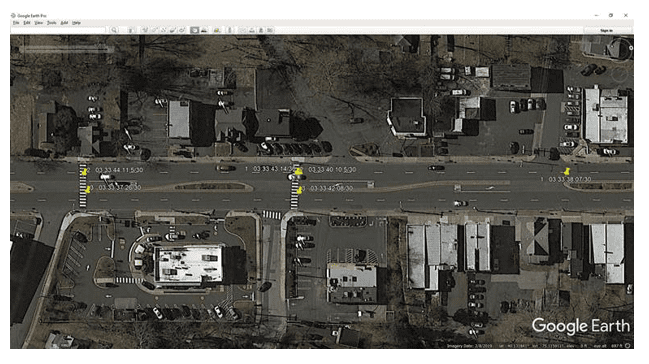 James R. Schmidt, Jr., BSME, Sr. Collision Reconstruction Engineer ::::
By now, you’ve likely seen our speed from video evaluations. It doesn’t matter whether it’s a still camera, a moving camera, a dash cam video, daytime, or nighttime. If we can identify sufficient points of reference, we can evaluate speed of a given vehicle from video.
In this example, we’re evaluating speed of three vehicles from one clip: 1) the vehicle equipped with the dash cam (vehicle 1); 2) the vehicle a distance ahead of vehicle 1 (vehicle 2); 3) a vehicle travelling in the opposite direction (vehicle 3). We are able to assess additional vehicles, if that were necessary.
Vehicle 1 travels just over 343 feet in 5 seconds plus 7 frames (of a 30 frame per second video). Speed is distance over time, which equates to approximately 45 mph for this vehicle. GPS speed displayed on the dash cam video is 44 mph for the dash cam-equipped vehicle. Keep in mind that the GPS speed displayed is typically slightly delayed. So, for all intents and purposes, we’re right on!

Vehicle 2 travels about 274 feet in 4 seconds plus 1 frame (of 30 frames in one second). Speed is approximately 46 mph, about the same speed as, but just a tad faster than, the dash cam-equipped vehicle.

Vehicle 3 travels about 273 feet in 4 seconds plus 12 frames (of 30 frames in one second). Speed is approximately 42 mph, which is similar to the two vehicles above, but a tad slower than them.

Previously, we’ve shown you speed calculations from just a fraction of a second of video. In this example, we’ve shown you speed calculations from several seconds of video for three different vehicles. It doesn’t matter if the vehicle of interest is the vehicle with the dash cam, a vehicle ahead of that vehicle, a vehicle crossing its path, or a vehicle travelling in the opposite direction. If we can see a given vehicle’s movements relative to identifiable points of reference, then we can evaluate its speed from video.
James R. Schmidt, Jr., BSME, Sr. Collision Reconstruction Engineer with DJS Associates, can be reached via email at experts@forensicDJS.com or via phone at 215-659-2010.