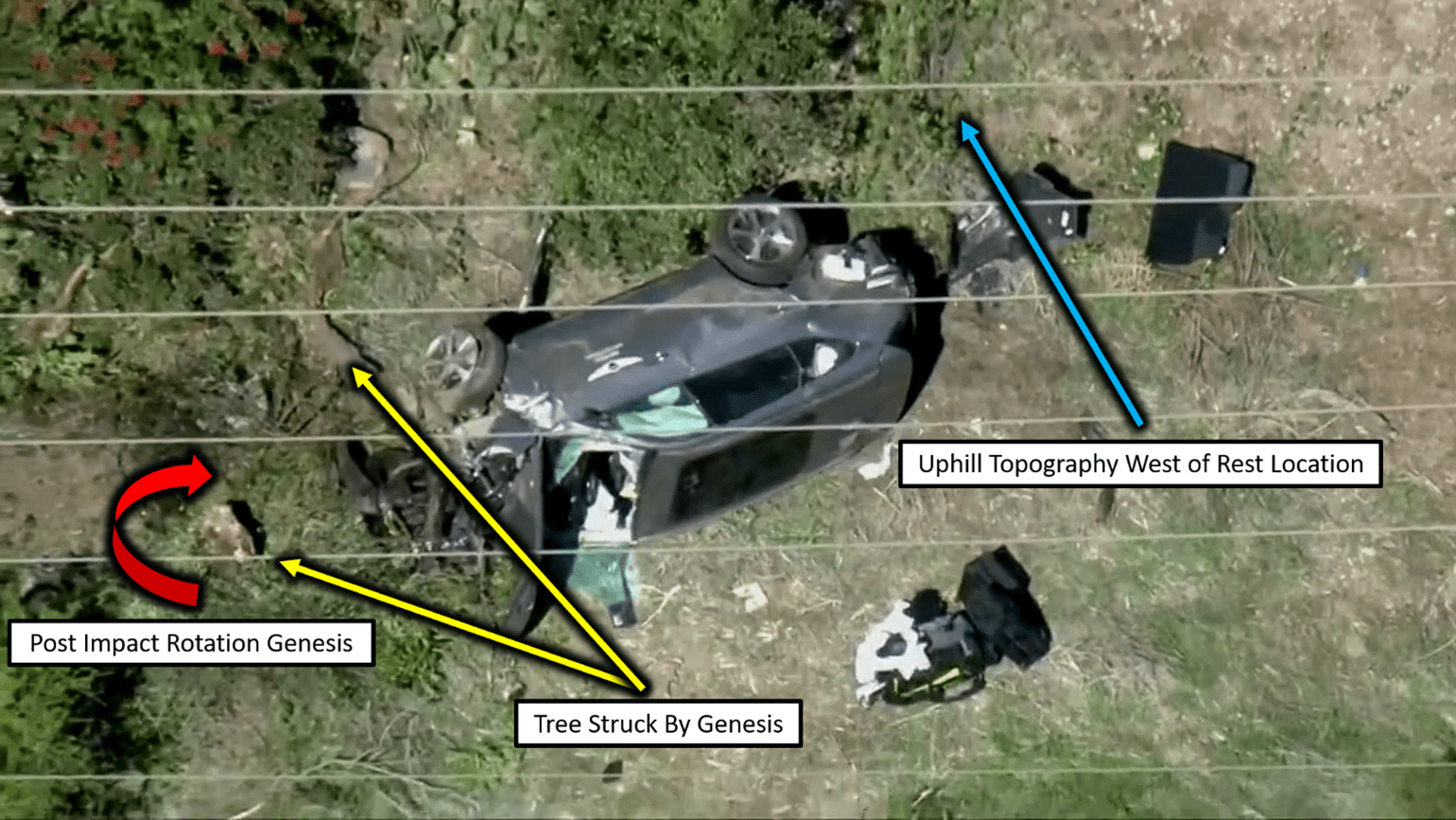 The first piece of physical evidence consistent with a “loss of control” of the Genesis is found on the center median strip separating the northbound lanes of Hawthorne Boulevard from the southbound lanes. Taking this as the first point where we can say that the collision sequence had begun, the approach to this location is more or less a straight shot for just under 900 feet. The tip of the median is at the start of a long, gradual bend in the roadway to the right – though this bend has a critical speed in excess of 130 miles per hour (the maximum speed at which passenger vehicle operators could, if they so desired, negotiate the turn without leaving yaw marks) and accordingly is not of the nature which would cause an operator to lose control of their vehicle.
It should be mentioned that Hawthorne Boulevard northbound, in this immediate area, is on a downgrade which approaches 10%. This downgrade, while steep, can still be safely and easily navigated consistent with data from the California Statewide Integrated Traffic Records System (SWITRS) – a statewide database maintained by UC Berkeley – which shows that there were no other substantially similar collisions within an approximately ½ mile radius for the most recent 10-year period in which crash data is available (2010 – 2019).
[*This database includes, apparently, all California collisions where an injury, including minor ones, was reported (approximately 720,000 collisions between 2010 and 2019 in Los Angeles County). Within the noted radius (which does NOT include the intersection of Hawthorne Boulevard and Palos Verdes Drive), there were no reported collisions in the northbound travel direction (Tiger’s direction of travel) and there was one reported collision in the southbound travel direction. The southbound collision occurred in 2010.]
Here is a map showing the location of Tiger’s collision along with those in the Statewide Database between 2010 and 2019: 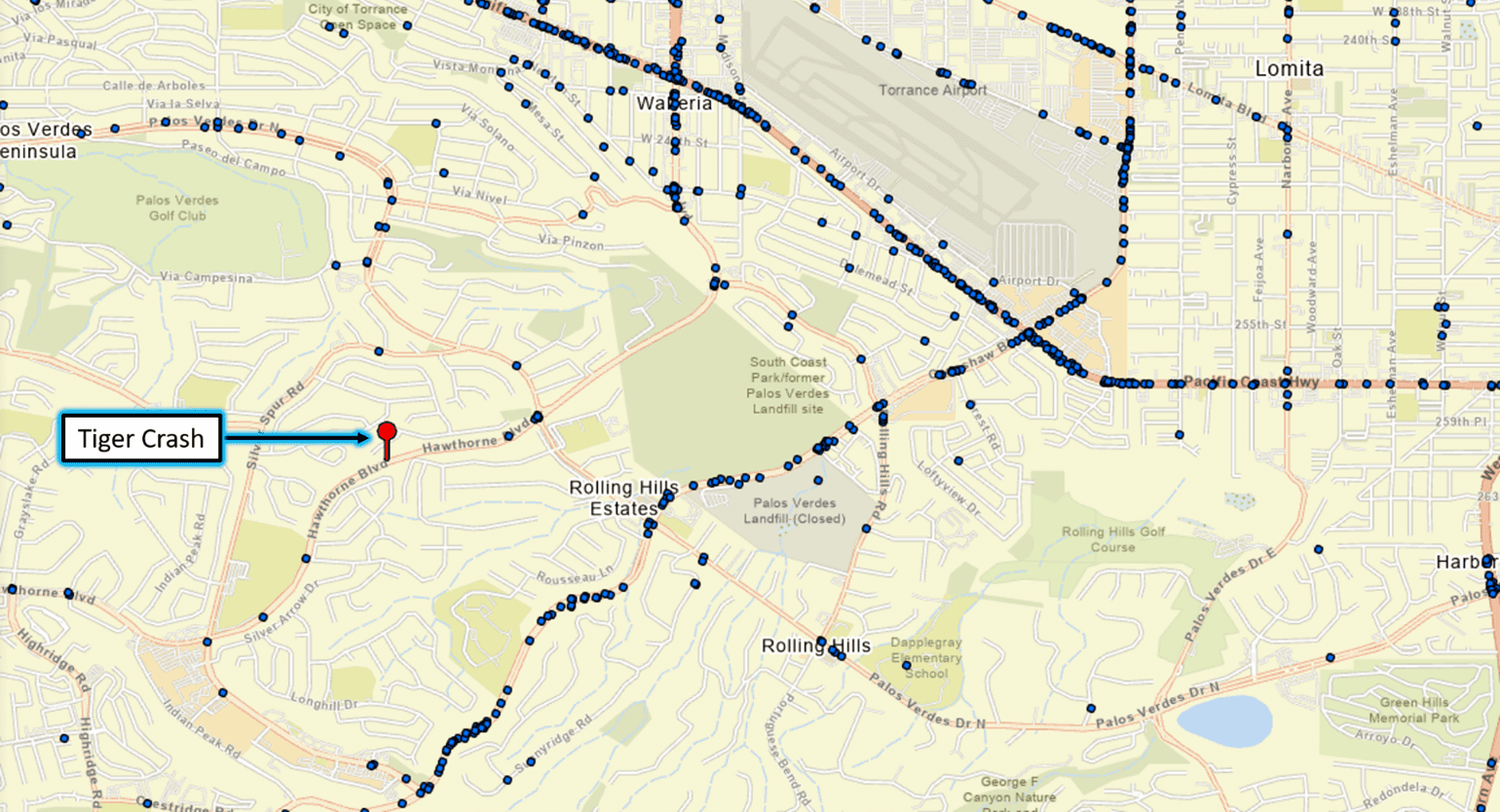 Narrative 2: This was a “rollover” collision, as noted in many headlines.  FALSE
Based on the physical evidence available at this time, including photographs and video of the roadway markings, the damage to the vehicle, and the point of rest location and orientation – this data is NOT consistent with the current characterization as a “rollover.”
While the Genesis does indeed come to rest on its driver side, this is indicative of the vehicle overturning at the tail end of the collision sequence and not with an extended rollover event, as it is currently being characterized in the news reports.  There are no roadway markings consistent with the vehicle overturning prior to departing the west side of the roadway (this departure point being approximately 100 feet from where it ultimately came to rest and approximately 300 feet north of where the vehicle crossed the center median), and the damage pattern to the roof of the vehicle (where there is almost no damage) suggests that the vehicle did not complete a full rotation at any point.
Rather, provided the principal direction of force consistent with the damage to the front of the vehicle (front to rear and centered towards the passenger side) and the damage to the foliage along the west side of the roadway (it appears a large tree/stump has been uprooted as a result of being struck by the Genesis), the data is consistent with the Genesis striking a tree/stump with its front, passenger side and then subsequently rotating in a clockwise direction consistent with the laws of physics.  This rotation, coupled with the uphill topography immediately west of where the Genesis came to rest, would introduce a substantive rotational force about the z-axis and promote the overturn onto the driver side.
Here, it is important to point out that the majority of the damage to the Genesis’s front end and the only overturning in the collision sequence both occurred within approximately 20 feet of where the Genesis came to rest.  The data is consistent with the vehicle being upright from the point of the loss of control until it struck the tree – or approximately 95% of the 400+ foot travel path across the median and southbound side of the roadway much discussed in current news articles.

What to expect moving forward:
One final misleading narrative I am hearing is that since there are no tire marks along the roadway, this is somehow evidence that there was no attempt to slow the vehicle at any point prior to or during the collision sequence.  The vehicle has anti-lock brakes which (by definition) prevent the wheels from locking.  Tire marks are left, typically, by wheels which are locked and sliding along the roadway.  As such, the absence of markings provides little to no information regarding the brake status prior to or during this collision.  With that said, the police have almost certainly already acquired what is known as “event data” from the vehicle, which will detail, at a minimum, the 5 seconds prior to airbag deployment through various data elements including speed, steering wheel angle, and brake status.  Depending on what that speed is (and there is nothing in terms of physical evidence which necessarily establishes the vehicle was traveling above the 45 miles per hour speed limit), this data may or may not capture the moments which preceded the initial loss of control.  However, depending on the capabilities of the police department conducting the investigation, there is likely additional pre-crash data which can be accessed through the infotainment system given that this is a brand-new vehicle with what I assume is the most advanced technology package Genesis has to offer.
Justin P. Schorr, Ph.D., Principal Collision Reconstruction Engineer with DJS Associates, Inc., can be reached via email at experts@forensicDJS.com or via phone at 215-659-2010.