Lt. Col. Bryan J. Smith, P.E., Construction Site Safety / Slip, Trip and Fall
Case Description/Summary: An older gentleman took his wheelchair-bound wife to see her doctor. Upon arrival, the gentleman found that the front entranceway to the doctor’s office was not wheelchair accessible. He left his wife outside and inquired within to find the handicapped accessible entryway. The gentleman was told to take his wife around to the rear of the building, where the accessible entrance was located. After proceeding to the rear of the building, the gentleman found an entrance in the middle of the building. The entrance did not have a wheelchair ramp to the door, though it was only a little lift needed to get the wheelchair over the 1.25-inch-tall threshold. The door swing was into the building. The gentleman pushed it open with his back as he backed his wife into the entrance and over the threshold. As soon as he cleared the doorway, the gentleman began falling down the basement stairs, located directly behind the door. Unfortunately, his wife and her wheelchair also came down the stairs, landing on top of him. The wife died just a few days later from injuries received during this incident, while he sustained serious physical injuries, as well as emotional trauma. 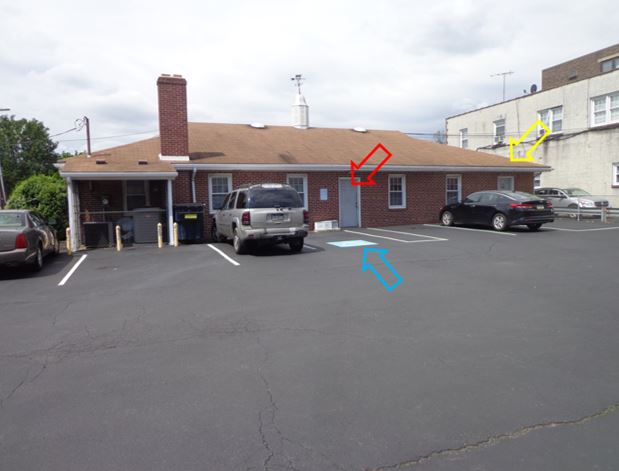 Expert Analysis: A field inspection was performed many months after the incident date. This inspection determined that the rear of the doctor’s office building had two separate entrance doors. One had a handicapped sign affixed to it in a low position, which became unseeable whenever an SUV was parked in front of the door, as had occurred on the day of the incident. (See the yellow arrow in the photo.) The second door (red arrow) was closer to the front of the office building, and even without a handicapped sign on it, would “logically” be the one intended for wheelchair access, as it was closest to the marked handicapped parking spot (blue arrow) and it lacked signage to the contrary.
Measurements were taken of the “official” accessible entryway and it was found to be less accessible than the entryway involved in the subject incident. The alleged accessible entryway was found to be far from compliant with the Americans with Disabilities Act (ADA) requirements. Additionally, the alleged accessible door allowed direct entry into a private patient exam room and was routinely kept in a locked condition.
The property owner advised the tenant that the stairs behind the incident door were hazardous due to the proximity of the entrance door; however, the tenant allowed his staff to continue their use of this door for access to the rear designated smoking area. It was likely that this allowance compelled the staff to keep the door in an unlocked condition, especially considering that it contained a deadbolt lock, requiring the use of a key to lock and unlock it each time it was used.
It was pointed out that an inexpensive fall guard should have been placed at the top of the basement stairs to prevent accidents of this nature, in addition to ensuring that the building had a safe and fully compliant ADA accessible entryway. 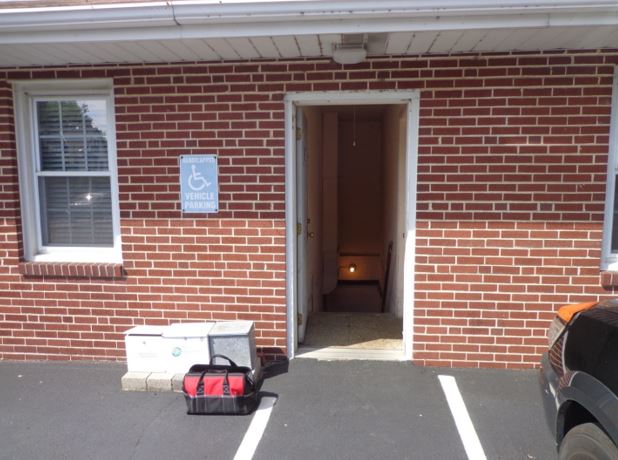 Result: The defendant settled out of court.
Lt. Col. Bryan J. Smith, P.E., Construction Site Safety / Slip, Trip and Fall with DJS Associates, Inc., can be reached via email at experts@forensicDJS.com or via phone at 215-659-2010.