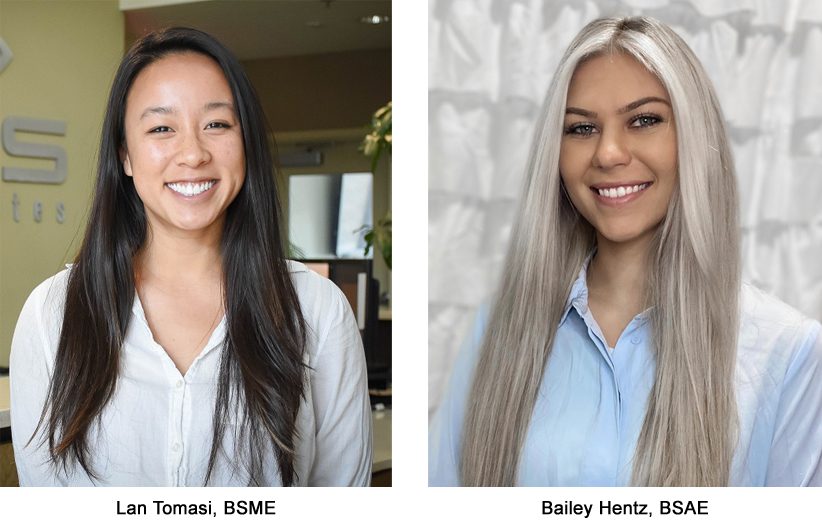 Let’s start with the basics, Full Name (so it makes sense when, in true DJS style, we use your initials below), Age, College, and Hometown?
Bailey: Bailey (Anne) Hentz.  I’m 24 years old and attended Penn State University, where I received my bachelor’s degree in Aerospace Engineering.  I grew up in Dillsburg, a tiny farming town in central Pennsylvania.  The name of the town has nothing to do with Dill Pickles, but that doesn’t stop us “Dillsburgians” from dropping a giant plastic pickle every New Year’s Eve.
Lan: My name is Lan Tomasi and I’m 25 years old.  I went to the University of Delaware and am originally from Wilmington, Delaware (Dela-where?)

What was you first job and where was the last place you worked before joining the DJS team?
BAH: My first job was at a movie theater.  I worked in the concession stand, ticket booth, and unfortunately for me, the theater cleaning crew.  Before joining the DJS family, I was a civil engineering intern at the Pennsylvania Turnpike Commission.
LTT: My first job was as a lifeguard/diving coach.  The last place that I worked was at Yards Brewing Company (cheers!).

According to the Society of Women Engineers less than 10% of freshman women intend to major in any STEM field, over 30% of those switch out of their STEM program while in college and ultimately, only about 1 in 10 engineers in the workforce are women.  How many other females were there in your degree program?  Did you ever consider any major other than one in STEM?
BAH: During my freshman year in the Aerospace Engineering program at Penn State, of the 200 students, 15 were female. Consistent with the Society of Women Engineers’ statistics, by graduation the number had fallen to about 10 females of the 163 students remaining in the program.
Before my time at Penn State, I attended Hawaii Pacific University where I’d intended to major in psychology but found myself more interested in math and physics.  After switching majors and transferring to Penn State, I don’t think I ever considered pursuing a profession outside of engineering.
LTT: There were about 20 to 30 females in my Mechanical Engineering program at UD.  I actually only ever considered Mechanical Engineering.  MythBusters was one of my favorite shows as a kid, so I think that’s why I only wanted to pursue STEM.

Is there any one specific takeaway you feel was unique to you as a woman in engineering which your male counterparts may not have experienced?
BAH: No, not really.  I believe to be a successful engineer it requires hard work, dedication, and a passion for engineering regardless of your gender.
LTT: I think a lot of my experience as being a female engineer is having people not take your ideas, thoughts, and inputs as seriously or with as much substance as male counterparts.  Throughout my educational experience, as well as my professional experience, I found that I have needed to extensively explain and substantiate many of my thoughts and ideas to others.  While this is, for a lack of a better word, annoying, I think that having my thoughts and ideas challenged so often has led me to be more outspoken and to ‘stick to my guns,’ not just in the engineering world.

Let’s end on one of those atypical interview questions – What are the three items you would take with you to a deserted island?
BAH: Approaching this question, of course, from an engineering perspective; I would have to take my dog, Crash (named long before I had any involvement in collision reconstruction), a lifetime supply of Hot Cheetos, and a boat.
LTT: Hmmm… only three items?  I need a bigger island!  (My three items: personal chef (comes with utensils), cell phone, water filtration system – catch me on the next season of Survivor)