Easier Airspace Authorizations on the Horizon for Commercial Drone Pilots 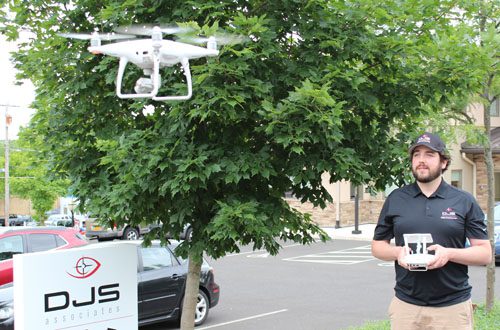 Jon W. Adams, Director of Architectural and Heritage Services ::::
The Federal Aviation Administration (FAA) is hard at work on developing the Unmanned Traffic Management System (UTM), a “traffic management ecosystem” that will “ultimately identify services, roles/responsibilities, information architecture, data exchange protocols, software functions, infrastructure, and performance requirements for enabling the management of low-altitude uncontrolled Unmanned Aircraft System (UAS) operations”.
The first step of this process has been centered on the Low Altitude Authorization and Notification Capability (LAANC), a system by which Part 107 (commercial) pilots will be able to obtain airspace authorizations in controlled airspace much more efficiently than the current system, which requires an online form to be filled out, followed by a waiting period of up to 90 days.
For many Part 107 pilots, including DJS pilots, this 90-day barrier has meant that some projects that could benefit from aerial stills and video could not be accomplished in a timely manner.
The LAANC aims to provide pilots with a streamlined solution, enabling (eventual) real-time automated notification and authorization. As part of the LAANC, the FAA recently released the first set of UAS Facility Maps for 268 airports nationwide, with more to come soon. These maps show “the maximum altitudes around airports where the FAA may authorize part 107 UAS operations without additional safety analysis”.
With this new information pilots can now hope to obtain authorizations much faster through the FAA’s Online Waiver Portal, and the way is being paved for instant authorizations in the future.
DJS is delighted to see the continued efforts by the FAA in ensuring the skies are a safe place to fly, with a clear plan to incorporate UAS into controlled airspaces.
Jon W. Adams is the Director of Architectural and Heritage Services with DJS Associates and can be reached via email at experts@forensicDJS.com or via phone at 215-659-2010.