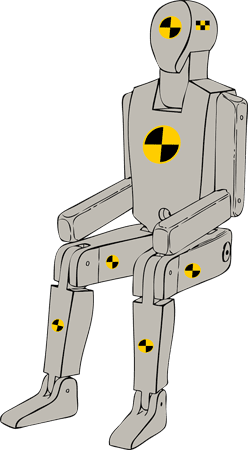 Robert S. Kinder, Jr., Mechanical Engineer ::::
The Insurance Institute for Highway Safety (IIHS) recently tested two electric vehicles, a 2017 BMW i3 and 2017 Tesla Model S. The testing consisted of five different crash tests. The highest obtainable award is the Top Safety Pick-Plus. Receiving the highest safety pick award requires that among the many parameters tested, a vehicle must have adequate headlights, crash prevention technology, and get the highest rating for all five crash tests. An example of crash prevention technology would be automatic braking. Currently, there are no fully electric cars for 2017 that made the Top Safety Pick-Plus list.
The Tesla Model S earned a low rating in a frontal crash that simulates a vehicle impacting a narrow object such as a tree or pole at approximately forty miles per hour. The crash dummy was able to hit its head on the steering wheel due to the forward motion that the seatbelt typically helps prevent. Crash testing also gives the manufacturer the opportunity to improve. Tesla will be making adjustments to improve the seat belt performance. Other areas that did not perform at the highest level were the headlights and roof strength. Both the Tesla and BMW earned good ratings for four out of the five crash tests. BMW received a lower mark in the head restraint test. The head restraint test identifies neck protection during a rear end collision.
Electric cars face different design constraints such as battery and motor placement. For example, the batteries in the Tesla are in the floor of the vehicle extending from front wheels to rear wheels, and the motor is mounted low in between the front wheels. While automakers are making progress to overcome these obstacles, the question that remains is: can a fully electric vehicle earn top ratings in all IIHS tests?
For additional information on Motorcycles, Bikes, ATVs and other Off-Road Vehicles, contact Robert S. Kinder, Jr., Mechanical Engineer with DJS Associates, at experts@forensicDJS.com or via phone at 215-659-2010.