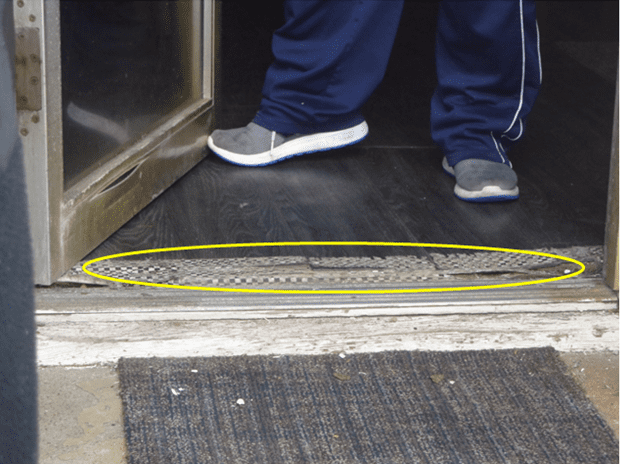 Bryan J. Smith, P.E., Construction Site Safety / Slip, Trip and Fall Consultant
Case Description/Summary: A retail patron attempted to exit the establishment’s front entryway when a piece of raised duct tape on the flooring caught his toe causing him to trip and fall down the exterior steps of the facility. The plaintiff received serious and permanent injuries during this event.
Expert Analysis: A site survey was conducted approximately two years after the incident to gather evidence on behalf of the plaintiff. The building’s entryway threshold was found to have duct tape, similar to that seen in photos taken by the plaintiff at the time of the incident. (see photo below). It was apparent that the establishment’s owner/operator used the duct tape to secure loose rolled vinyl flooring at the door’s threshold position. The owner/operator would remove and reapply duct tape at that location “as-needed” when it became loose and detached. His actions established notice of the condition and the temporary nature of the duct tape “repair.” The municipality’s codes required property owners to keep their premises structurally sound and in a state of good repair to avoid safety, health or fire hazards. At best, the use of duct tape to effect repairs of any walking surface should be considered only temporary in nature and only used for a short term (if at all). The fact that duct tape had been in use at that location for two years after the timeframe of the incident evidenced that the property owner/operator incorrectly considered the duct tape to be an adequate and permanent repair. Temporary walkway repair actions must be monitored at such frequency that the temporary repair itself cannot become hazardous. Better still – avoid all temporary walkway repairs and make permanent repairs instead.
Result: The plaintiff accepted a significant settlement offer.
Bryan J. Smith, P.E., Construction Site Safety / Slip, Trip and Fall Consultant with DJS Associates, Inc., can be reached via email at experts@forensicDJS.com or via phone at 215-659-2010.