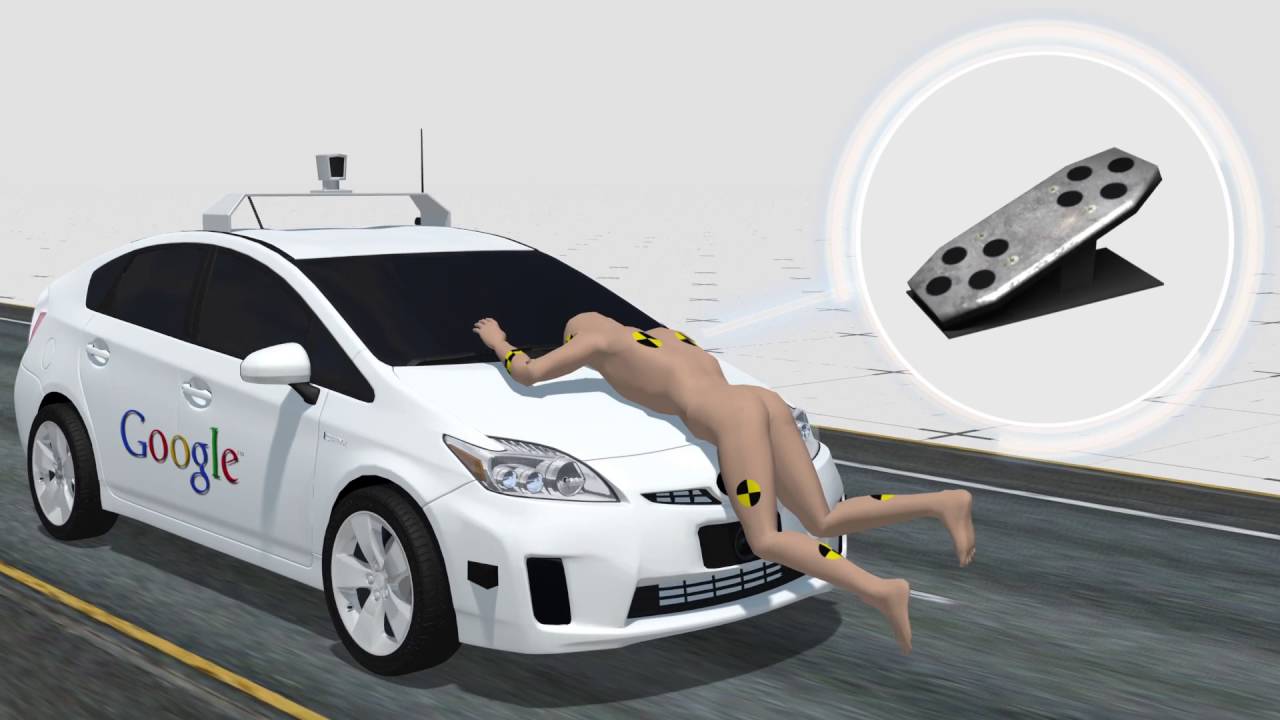 Robert T. Lynch, PE, Senior Collision Reconstruction Engineer ::::
Upon reading this headline, visions of one’s childhood on a trampoline in a Velcro® suit may come to mind. One might also think, why in the world would cars want to catch people like flies? The answer is: pedestrian safety. Trapping a pedestrian on a car’s hood would prevent the secondary impact that occurs after a pedestrian is initially struck by the front of a vehicle and then impacts the roof, ground or other vehicle/object. This secondary impact is often the impact that causes the most severe injuries to the pedestrian.
As the technology for the Google Car is rapidly advancing in anticipation of the fully-autonomous vehicle seeing production in the near future, the patent appears to be a temporary solution to keep pedestrians safe around the driverless cars when they hit the road while pedestrian identification technology improves. Google acknowledges that collisions between a vehicle and pedestrian may still occur and it is desirable to provide vehicles with pedestrian safety mechanisms to mitigate injuries for this foreseeable event.

Vehicles designed with pedestrian safety in mind have been around for some time now. Europe has vehicle safety regulations regarding the survivability of crashes between pedestrians and vehicles at speeds up to 25 miles per hour. In order to accommodate the requirement, automakers of vehicles for the European market have changed the shape of their front ends making them smooth and soft, introduced infrared sensors to detect body heat, and designed deformable hoods to better absorb the initial impact. Some manufacturers have even developed pop-up hoods to further cushion the initial impact between pedestrian and vehicle to absorb energy and mitigate injuries.
Google’s sticky hood idea seems as far-fetched as the idea of the self-driving Google Car once did and it may never see the light of day, but the patent is yet another way that Google is thinking about how to keep people safe both inside and outside their robotic car.
Robert T. Lynch, PE is a Senior Collision Reconstruction Engineer with DJS Associates and can be reached at 215-659-2010 or via email at experts@forensicDJS.com.