GPS Coordinates: How Many Decimal Places do You Need? 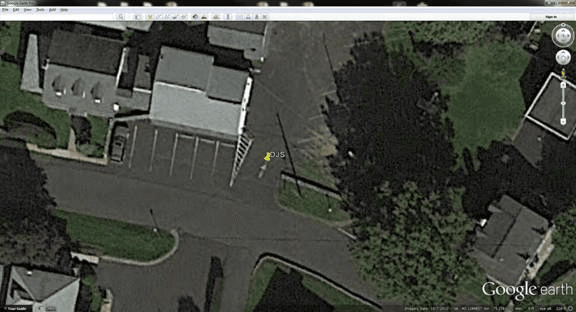 James R. Schmidt, Jr., BSME, Collision Reconstruction Engineer ::::
As reconstruction engineers, we generally quantify vehicles speeds from physical evidence in whole numbers (i.e. 50 mph), and in ranges (i.e. 45 to 55 mph), but rarely in fractions of a mile per hour (i.e. 50.3 mph) and certainly never beyond one decimal place. Physical evidence does NOT allow for the precise determination of vehicle speed down to the hundredth of a mile per hour. It just doesn’t. Anyone who quantifies it as such has NO basis in doing so, nor the understanding of the limitations of an analysis based on input parameters that typically have ranges themselves.
So, that same thought process must then apply to GPS coordinates too, right? Whole numbers only? No decimal places? The answer is a resounding NO!
When it comes to GPS coordinates, the more decimal places, the better. Here’s an example:
A known point in the parking lot of the old DJS offices (before being newly re-built a few years ago) is identified in an aerial photograph.

If you try to replicate that point with no decimal places, just whole numbers, the resulting point is nearly 11 miles away, not even in the same state.

Using just one (1) decimal place, you get into the same county, but still over 2 miles away … not even close.

Using two (2) decimal places, you get into the same neighborhood, but still nearly 1/4 mile away … getting closer, but still not useful in pinpointing location.

Using three (3) decimal places, you get into the same parking lot (in this example), about 40 feet away from the actual point of interest.

Using five (5) decimal places, you hone in on the point of interest, within about a foot and a half.

Finally, using six (6) decimal places, you get to the exact point!

So, when it comes to GPS data, you need coordinates out to at least five (5) decimal places to be useable in terms of locating and subsequently evaluating incremental speeds between points.
You can’t quantify vehicle speed down to fractions of a mile per hour, let alone a single whole number in most instances. But, when it comes to GPS data, the more decimal places, the better … and necessary even!
James R. Schmidt, Jr., BSME, is a Collision Reconstruction Engineer with DJS Associates, Inc. and can be reached via email at experts@forensicDJS.com or by phone at 215-659-2010.