I Can’t Get Enough of Surveillance Videos! 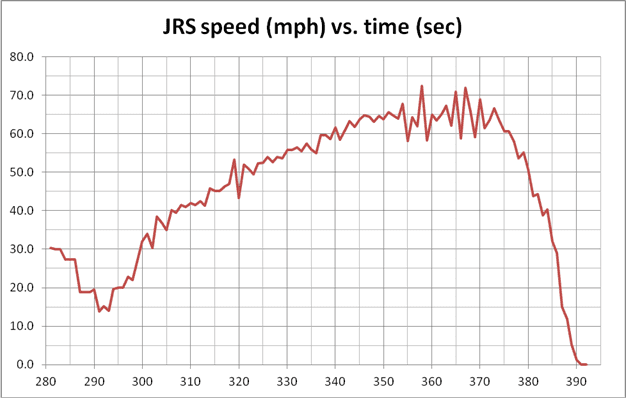 James R. Schmidt, Jr., BSME, Collision Reconstruction Engineer ::::
Surveillance and Dash Cam Video can be useful technology in evaluating vehicle speeds (among other things); but just how is this done? The following is an example that recently came across my desk for an engineering evaluation.
The client provided DJS surveillance videos from a bus. It was my job to evaluate these videos. The process included plotting incremental positions of the bus relative to roadway features and lane striping. Since the plot provided distance and the video provided time, the speed of the bus from the video was able to be determined. The bus speed versus time from incremental bus positions per the video was then graphed as illustrated below.

The data also included GPS speeds for the bus over a period of time. This data was independently evaluated by inputting the data into Excel, processing for incremental distances and accelerations, and then plotting the data as seen in the graph below.

When the two independent plots are overlaid, the following comparison of the video evaluation and the GPS is easily visualized.

So, what does this tell us, and why is it so impressive and interesting to an engineer? The charts indicate that nearly two minutes of independent evaluation of vehicle speeds from the video closely match what the on-board GPS tells us. By independently plotting both sets of data, we now know where the bus was and what it was doing at any given point within the timeframe of interest.
As with any form of evidence, the better quality of the video the more that can potentially be extracted from it for an engineering evaluation. Daylight is always a plus. Plenty of lane striping, as well as other unique features for use in plotting incremental positions, is helpful.
Upon obtaining the surveillance or dash cam video through discovery, DJS can review the data, and with enough information available, can evaluate key points of interest which you may not have even known was possible.
James R. Schmidt, Jr., BSME, is a Collision Reconstruction Engineer with DJS Associates and can be reached via email at experts@forensicDJS.com or via phone at 215-659-2010.