Inflatable Slide is No Safe Ride 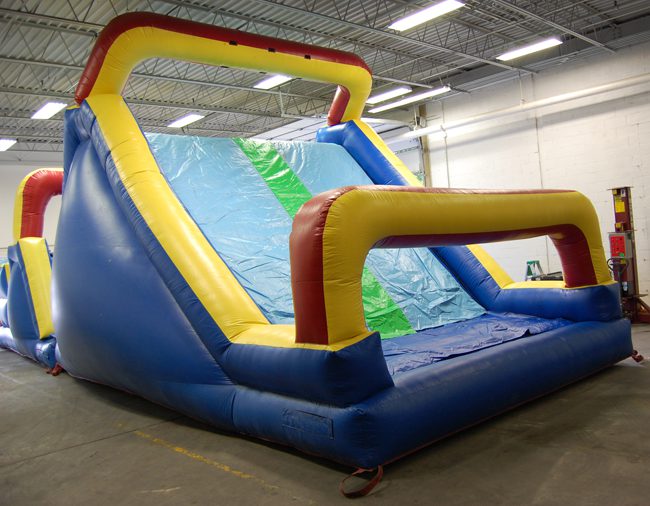 Case Description: The plaintiff was attending a vacation bible school celebration being held at the local church. The celebration included rented inflatable amusement devices provided by the the rental company defendant. One of the devices provided was a 24 foot dry slide to be set up on the grounds of the church. The church representative, the second defendant, hurriedly signed a document that the defendant rental company provided which explained all the policies. The inflatable slide was then set up with no instructions or directions given to the church.
It was nearing the end of the event, and the plaintiff wanted to slide down the slide with her daughter. As the plaintiff climbed the slide, she observed boys at the top getting ready to slide down. She then felt the slide shifting and started to collapse. The collapse of the slide caused the plaintiff to lose her balance, fall on the stairs, and eventually end up on the ground below.

Analysis: This type of situation occurs when the slide has not been set up properly. There are tethers affixed on the slide near the top to be used to steady the slide due to motion of the participants using the slide. From information and testimony from the defendants, it appears the slide was only secure with 4 stakes; one on each corner of the slide. The 2 tethers at the top of the slide were either not attached to individual stakes or were attached improperly to a corner stake. Furthermore, it was found that this inflatable slide was nearing the end of its useful life as evidenced during the inspection. The slide was patched together many times and the seams showed signs of stretching.
Oversight of amusement rides varies widely from state to state. In Pennsylvania, the state government requires amusement ride owners/operators to register rides, obtain training for inspection purposes, and conduct an inspection of their inflatables before each use, and submit paperwork and itinerary to the state. The state oversees paperwork submitted by the amusement park or carnival company, and for this system to work each company much be registered with the state.
Both of the defendants in this case failed to comply with PA Amusement Ride regulations, US Consumer Product Safety Commission’s Inflatable Safety Bulletin, and amusement ride industry consensus standards. The entire incident was preventable had the defendants followed and observed laws and standards governing the use of inflatable amusement rides.
Result: Case settled.
Kenneth R. Martin is an Amusement Ride Safety Consultant with DJS Associates, Inc., and can be reached via email at experts@forensicDJS.com or by phone at 215-659-2010.