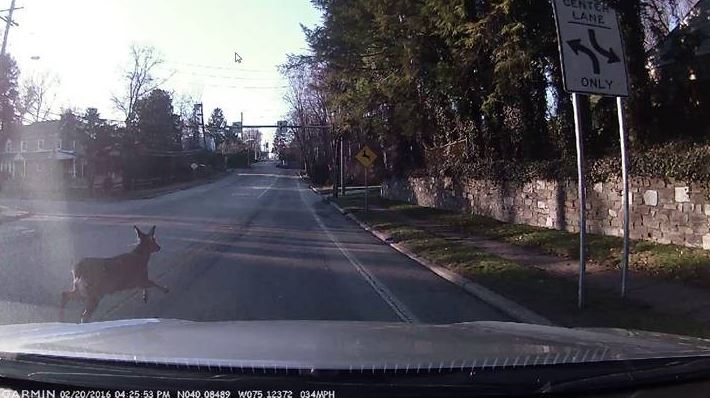 James R. Schmidt, Jr., BSME, Collision Reconstruction Engineer ::::
By a show of hands, how many of you have ever seen a deer? Okay, that looks like to be just about everyone out there. How many of you have ever had a deer run out in front of you while you were driving? Okay, that looks like a good number of you out there. How many of you have ever hit a deer that ran out in front of you? Okay, there’s at least one of you out there.
Well, a few months ago, with my Garmin dash cam always rolling, I encountered a deer running out in front of me. Broad daylight. North/south roadway, 55 feet wide give or take. 35 mph posted speed limit. One lane of travel northbound with a narrow right shoulder, a wide painted gore area in the middle of the roadway that changes to a center left turn only lane, one lane of travel southbound with a very wide right shoulder. The roadway is bordered by raised curbs. A residential area. And apparently also a known deer area, as the advisory signage would suggest. I didn’t notice the signage until I looked back at the dash cam video. The deer apparently did, as she crossed right there adjacent to the deer crossing advisory sign.

My girlfriend and I were travelling northbound on a late Saturday afternoon in late February, with me behind the wheel. And then … it happened. A deer ran out in front of me. It came from the left, which means it was out there for a good distance; but, I didn’t see it until it was “immediately” to my left running adjacent to my left front fender. It’s a good thing that she, the deer that is, was 1) running, and 2) running at an angle to the north-northeast (i.e. in the same general direction that I was travelling). Given that combination of parameters, I was able to react and slow in time to avoid an impact. As I did, the deer kicked its speed into high gear, got across my northbound lane of travel, sprinted briefly along the right side sidewalk, before cutting right at the opening at the end of a stone wall. The deer leapt into the air, clearing a 14-foot wide driveway with ease, and then bounded toward a wooded area. Whew! That was a close call!
Well, me being a collision reconstruction engineer and a numbers guy who crunches numbers in his sleep, I had to do some analysis. First, I wanted to know where the deer came from, and if she was visible for longer than I had seen her. Second, I had to crunch some numbers … I just had to! So, I did what any reasonable collision reconstruction engineer would do. I downloaded the video file from my dash cam, and got right to it! I plotted incremental positions of both my vehicle and the deer, based on the video.

From there, I calculated incremental speeds for both my vehicle and the deer. I’m not a deer guy, so I had no idea how fast a deer could run. This particular deer got up to a speed of 20 to 30 mph (maybe a bit more even), as she crossed the road and kicked it into what seemed to be high gear. Me? I was travelling right around 40 mph, based not only on the GPS readings captured by the dash cam, but also according to my own, independent position plotting and speed calculations.

From a study of the video and the point at which I applied the brakes, as per data captured by the dash cam, using a textbook daytime Perception-Reaction Time (PRT), my Point of Perception (POP) of the deer as a hazard was about when the deer was entering the right side of the opposing southbound lane of travel (i.e. forward and well to my left). From my actual recollection, however, my PRT may have been a bit shorter than textbook because my POP of the deer as a hazard may have been a bit later than that – once the deer was into and running north-northeast in the southbound lane of travel. Here’s a view of the deer and our relative positions at about that point in time:

Be aware that the dash cam is positioned in the upper center of my windshield, several feet forward of my seated driver’s position and a foot or so to my right, so the view of this cam, or any cam for that matter, is a bit different at any given point in time than the view of the driver.
I braked hard and slowed down to a speed of about 10 mph, based on GPS readings from the dash cam, as well as my independent position plotting and speed analysis.

Note that the GPS speeds are “slightly” delayed relative to actual speeds, evident around the time of the deceleration.
An impact was “narrowly” avoided.

Note the deer crossing advisory signage that, as it turns out, the deer was running directly toward. See, she knew what she was doing.
Had the deer been crossing straight across/perpendicular to the roadway, the outcome may have been a collision instead of a near-miss. But, while both the deer and I (and my girlfriend) had a bit of scare for a few seconds, we can all talk and laugh about it after the fact, since no one got hurt.

Had anyone been travelling northbound behind me, we may not have been so lucky, given how the rules of the road have gone away these days. Following too closely. Noses buried in smart phones while driving. Luckily no such driver was behind us at that time.
If I put this much effort into a near-miss I had with a deer while driving, imagine how much effort we will put into working on a case for you!
James R. Schmidt, Jr., BSME, is a Collision Reconstruction Engineer with DJS Associates, Inc. and can be reached via email at experts@forensicDJS.com or by phone at 215-659-2010.