Paying Attention: Will an Alert Driver Avoid a Crash? 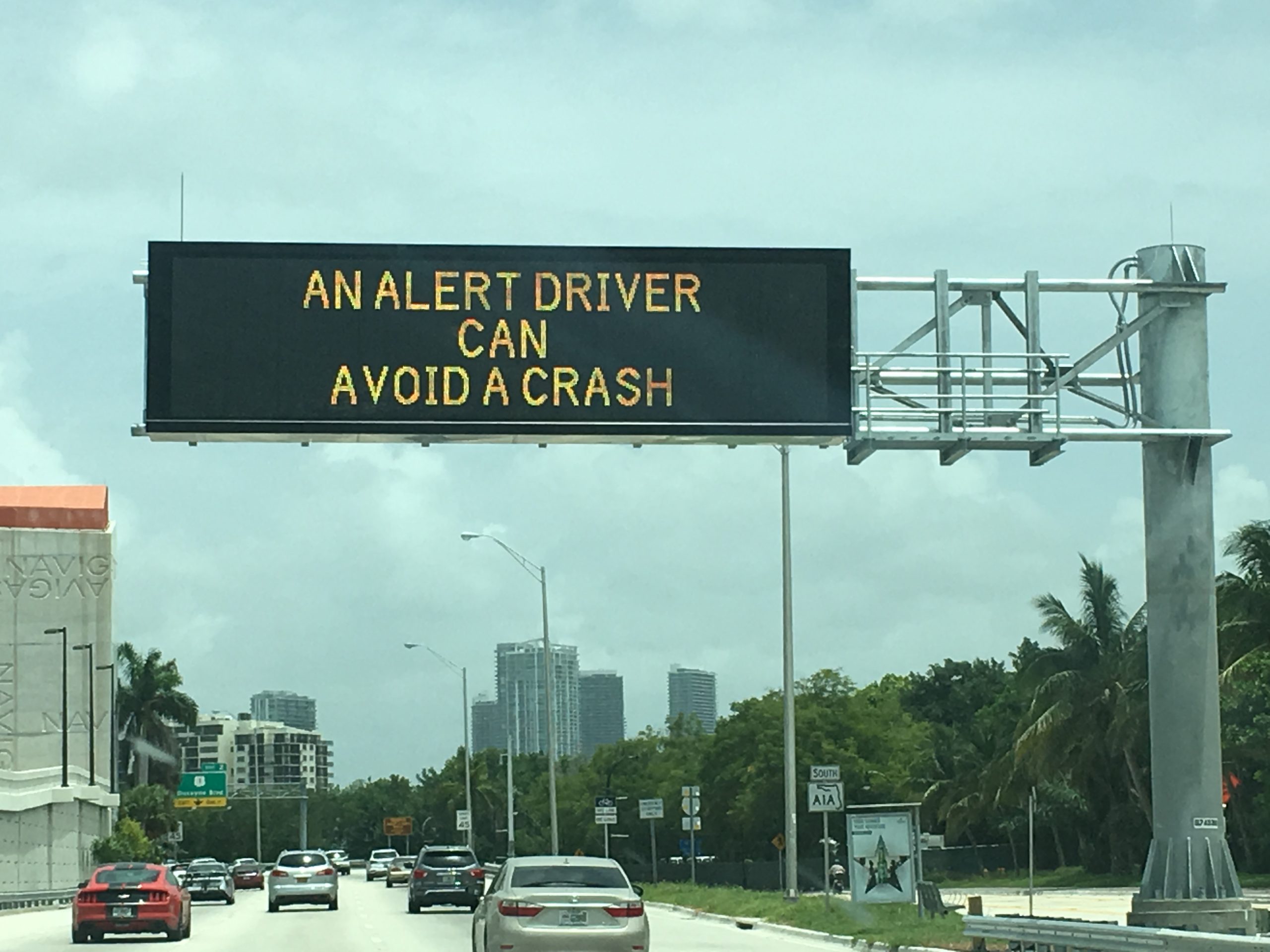 Robert T. Lynch, PE, Senior Collision Reconstruction Engineer ::::
Possibly… but not necessarily. I recently visited the Miami, Florida area on vacation and encountered several of these signs on the highways in and around the city. The wording of the sign had me reflecting on my undergraduate logic class, literally learning about the P’s and Q’s of modus ponens (if P then Q) and modus tollens (if not Q then not P). By the rules of inference, if a statement is true, then so is its contra-positive. In other words, (if P then Q) is the same as (if not Q then not P).
Now that we all are up to speed with our P’s and Q’s, when the Miami sign is applied to the logic framework, the sign would read: if a driver is alert then a crash can be avoided. Accepting this statement as true indicates that its contra-positive is also true: if a collision occurs then the driver was not alert. While this statement makes logical sense, as drivers who are not paying attention are more susceptible to crash, not all collisions occur due to driver inattention.
Take for example, a driver approaching a slow-moving or stopped vehicle on the highway at night. This unique traffic scenario is known as “looming,” where the driver can easily detect the brake lights of the vehicle ahead from distances well over 1000 feet on a straight and flat roadway. The driver may not realize how quickly they are closing in on the lead vehicle until they are much closer, sometimes within only a couple hundred feet. Here, an alert driver will detect the presence of the lead vehicle, but observation of the taillights alone is no cause for concern or immediate attention by the driver. Drivers assume other vehicles ahead of them on a limited-access highway are traveling at speeds consistent with highway use. Therefore, merely closing in on a lead vehicle does not provide the necessary stimulus for an emergency reaction. Rather, it is the rate of closing (i.e. looming) that is the dominating factor to determine the distance from a lead vehicle where a driver would perceive the hazard of the slow-moving or stopped vehicle in the roadway ahead. At highway speeds, a looming distance of 200 feet equates to 2 to 3 seconds of lead time. Under nighttime conditions, this may be insufficient for a driver to perceive, react and complete an avoidance maneuver such as swerving to an adjacent lane to prevent the collision.
So, while a driver is supposed to remain vigilant and aware of his or her surroundings while driving, even an alert driver cannot always avoid a crash.
Robert T. Lynch, PE, Senior Collision Reconstruction Engineer at DJS Associates, can be reached via email at experts@forensicDJS.com or via phone at 215-659-2010.