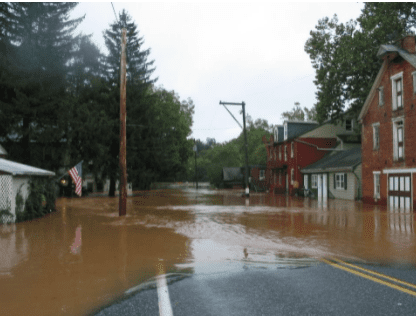 John R. Scala, Ph.D., CCM, Certified Consulting Meteorologist
Case Synopsis: The insured constructed a driveway adjacent to the claimant’s property. Subsequent heavy rain resulted in a mudslide leading directly to damage of the claimant’s property. Counsel argued that the driveway work was accomplished without proper permits or an engineer’s inspection; however, the question remained whether the construction contributed to the flooding of the claimant’s property.
Expert Analysis: A warm front drifting to the east on a humid summer afternoon triggered the development of slow-moving thunderstorms capable of heavy rain. The insured experienced several rounds of thunderstorms with the most intense activity occurring between 2:34 p.m. and 5:38 p.m.
The local National Weather Service Forecast Office (WFO) issued a Flash Flood Watch for several counties in the path of these storms from 2:00 p.m. that afternoon through 1:00 a.m. early the next morning. The watch addressed the potential for showers and thunderstorms capable of producing torrential rain totaling 1-3 inches with locally heavier amounts of 3-5 inches over a short period of time.
The WFO issued a Flash Flood Warning at 3:00 p.m. valid through 7:00 p.m. for several locations (including the insured) expected to be impacted by the heavy rain. The Flash Flood Warning was followed by a Flash Flood Emergency at 4:45 p.m. The statement included the following, “At 441 PM EDT, emergency management reported heavy rain across the warned area. Up to six inches of rain have already fallen. Flash flooding is already occurring. Numerous vehicle and residential evacuations are occurring.”
A Community Collaborative Rain Hail Snow (CoCoRaHS) observer located 1.3 miles to the north of the insured’s property reported 4.60 inches of rain over a three-hour period ending at 5:30 p.m. The radar estimated rainfall over the same period for the CoCoRaHS site was 2.90 inches equivalent to an underestimate of 37%. Doppler radar-based rainfall estimates in the presence of heavy precipitation rates are known to be compromised when compared to ground-based measurements of the actual rainfall.
The radar precipitation algorithm estimated a three-hour rainfall of 2.60 inches at the insured and a total accumulation of 3.42 inches ending at 5:30 p.m. Applying the same correction based on data from the CoCoRaHS site to account for the radar sampling deficiency during high intensity rainfall events produced a three-hour estimated total of 4.12 inches and an event total of 5.42 inches at the insured.
A second CoCoRaHS observer located 4.4 miles to the east southeast of the insured and within the radar observed axis of heaviest precipitation reported a total accumulation of 5.15 inches. Doppler radar estimated event total rainfall at this site was 4.56 inches resulting in an under reporting of 11.5%, a more accurate measure over the duration of the event than the previous CoCoRaHS measurement. Applying the second correction factor to the insured resulted in an event total of 3.86 inches.
The Doppler radar estimated rainfall was applied to a statistical analysis of the average recurrence interval for the observed three-hour and 24-hour totals at the 90% confidence level. The analysis revealed the observed three-hour rainfall was an extreme event accompanied by an average recurrence interval of once in 200 years equivalent to an annual probability of occurrence of 0.5%.
Outcome: A civil or structural engineer can opine on the design strategy of a driveway, the materials used and the ability of the design to withstand the loads placed upon it. The amount, intensity and duration of the precipitation impacting the designed structure lies within the expertise of the meteorologist. In this case, the extreme nature of the rainfall became the most important consideration, ultimately leading to a settlement.
John R. Scala, Ph.D., CCM, Certified Consulting Meteorologist with DJS Associates, Inc., can be reached via email at experts@forensicDJS.com or via phone at 215-659-2010.