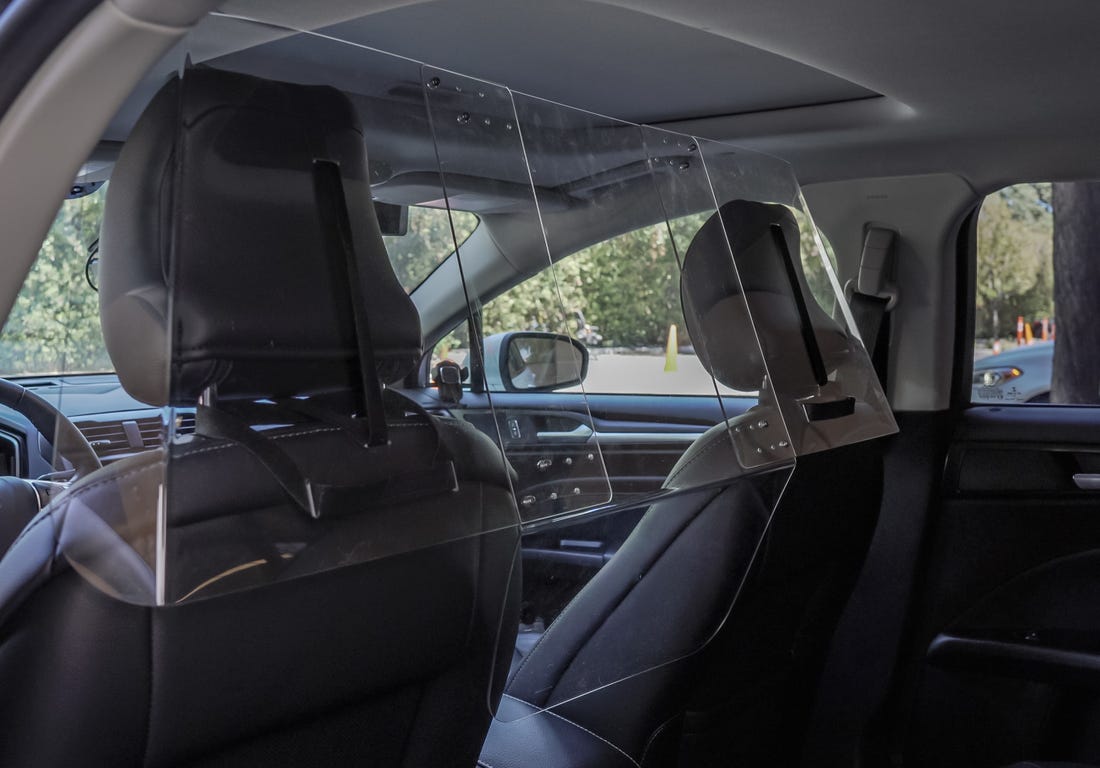 John R. Yannaccone, P.E., Senior Mechanical Engineer
2020 has been a year full of changes. Virtual learning, Zoom meetings, and wearing masks are now daily rituals experienced in our world. In the transportation industry, even more changes are being made in the name of social distancing; however, some changes might negatively affect the safety of ride-share passengers. In an effort to separate the driver’s space from the passenger’s space in cars, some drivers have added aftermarket barriers, while others have resorted to homemade walls between the front and rear seats of their vehicles. While these barriers are being added to keep people healthy, how might they affect the safety of the occupants should there be a crash?
The Federal Motor Vehicle Safety Standards (FMVSS) include requirements for passive safety, in other words, safety the occupants have by simply entering the vehicle, without taking any other action. Sometimes this is referred to as “occupant friendly interiors” that is, surfaces designed to reduce the risk of injury should an occupant contact them in a crash. In the rear seat, this encompasses the seatbacks and pillars of the forward row, as well as other components designed to minimize injury during a crash. To verify the safety of various surfaces, the Federal Standards include a test where a simulated head is propelled into the surface and the deceleration of the head is measured, failing if exceeding a specified value. This test is required for surfaces located within what is defined as the “head impact zone.”
When barriers are added between the front and rear compartments, it not only changes the physical characteristics of the surface, but also decreases the distance from the surface to the rear seat occupant. The result becomes that the occupant no longer impacts a FMVSS compliant surface, but rather they can impact the added barrier. Some of the added barriers are simply plastic sheets to create a separation, while others include more rigid commercial plastic barriers.
Along with the potential dangers of occupants striking the barrier during a crash, additional risks are considered regarding the barrier’s ability to remain attached or intact during a crash. Questionable situations include the plastic fracturing, resulting in sharp edges that could lacerate an occupant, or barriers dislodging during a crash and striking an occupant. Perhaps even more troubling than the commercial barrier are homemade barriers, constructed from components such as boards, PVC tubing, or metal pipe with plastic panels added.
A final risk worth considering for these added barriers is the threat of affecting the performance of other safety features in the vehicle, such as side curtain airbags when barriers are installed in the deployment zones for these devices.
While these added barriers can reduce the exposure between vehicle occupants who cannot socially distance, they introduce hazards that did not exist in the vehicle prior to modification.
John R. Yannaccone, P.E., Senior Mechanical Engineer with DJS Associates, Inc., can be reached via email at experts@forensicDJS.com or via phone at 215-659-2010.