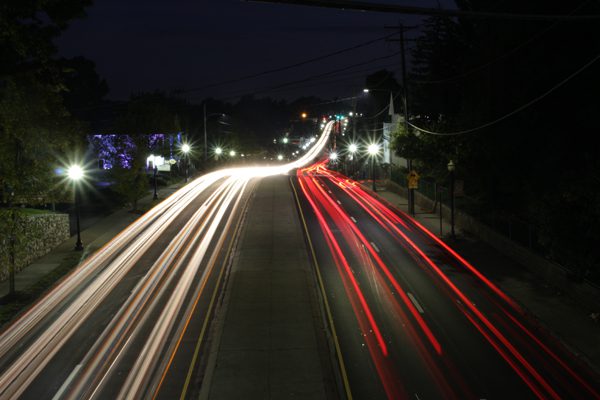 Robert T. Lynch, PE, Senior Mechanical Engineer ::::
To mitigate pedestrian collisions, automobile manufacturers, such as Toyota, have started to install autonomous tech, including pedestrian detection systems and automatic high beams, as standard equipment across all models. With new high-intensity, energy-efficient street lighting technology coming down in price as well as maintenance and operational costs, more and more municipalities are adding street lights along their roadways, especially in areas with high pedestrian traffic.
Properly positioned street lighting makes a roadway safer for pedestrians, but it also presents an added challenge to the reconstructionist attempting to evaluate what the lighting conditions were at the time of the subject incident. DJS Associates was recently retained to conduct a nighttime site inspection with the hope of acquiring representative photographs to show how dark/bright the roadway was under similar conditions as the time of the subject incident. To our surprise, multiple street lights were added along the opposite side of the roadway between the incident and the inspection. The conditions were not substantially similar to those at the time of the incident, so nighttime photographs would have provided little to no benefit to the reconstruction.
However, all was not lost. We were able to isolate and measure, individually, the illuminance (amount of light falling onto a surface) of the lights in the area that were present at the time of the subject incident. It turned out that the older street lights, that had not changed since the date of the incident, provided ample illumination of the roadway to allow for an approaching driver to observe the pedestrian from sufficient time and distance away to perceive, react and avoid impacting the pedestrian.
So, while new tech is making roadways brighter and safer for pedestrians at night, an engineering analysis of the conditions at the time of the incident versus those at the time of the nighttime inspection is essential to determine the amount of light falling upon the pedestrian and whether or not a collision is avoidable.
Robert T. Lynch, PE, Senior Mechanical Engineer with DJS Associates, can be reached via email at experts@forensicDJS.com or via phone at 215-659-2010.