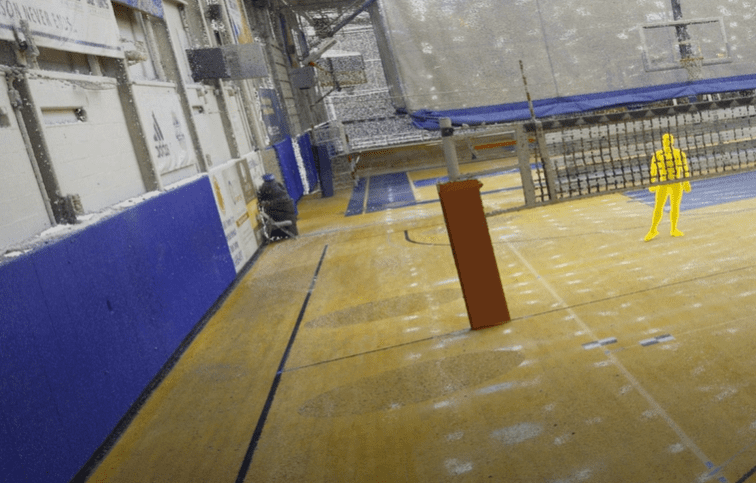 DJS was tasked with analyzing surveillance video which captured an unfortunate accident during an indoor recreational volleyball game where a player lost their balance and ran head-first into a padded wall, resulting in a debilitating spinal injury. A complex task in the best of circumstances, working with video that isn’t from the native surveillance system requires extra levels of scrutiny to make subsequent steps in the analysis process as accurate and resolute as possible. The video provided in this case was a smartphone recording of a monitor displaying the surveillance video of the accident.

A reverse-engineering process is required to stabilize any handshake, remove perspective, and reconstruct the dimensions of the original video frame. Once returned to an acceptable composition that falls within the established norms of digital video standards, the camera view can be calculated in three dimensions relative to high-density LIDAR scan data of the facility. The plaintiff was then tracked in the 3D environment using a to-scale rigged mannequin to accurately reconstruct the steps and posture recorded in the video. The reconstructed scene can then be viewed by multiple angles to help biomechanical experts and other viewers better understand the circumstances of the event and can even reveal movement previously obstructed by foreground objects.

Laurence R. Penn, CFVT, Senior Forensic Animation/Video Specialist with DJS Associates, Inc., can be reached via email at experts@forensicDJS.com or via phone at 215-659-2010.