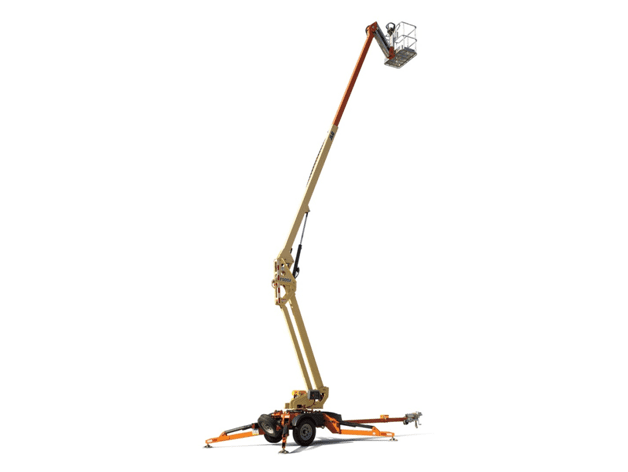 John R. Yannaccone, PE, Senior Mechanical Engineer ::::
Case Synopsis: A homeowner rented a towable boom lift to assist with the removal of branches that overhung his house. After beginning removal of the limbs, the homeowner realized that as he cut the branches from the tree, they were dropping onto his roof and rain gutters. In order to prevent damage to his roof and gutters, he decided to tie the branches to the platform rails prior to cutting them from the tree. This was effective for a short period of time in preventing limbs from falling onto his house. After cutting a number of branches, which were all tied to the platform railing, the homeowner cut another branch and the lift began to tip over and came to rest against the side of the house. The homeowner fell to the ground and sustained serious injuries.
Expert Analysis: At the time of renting the boom lift, the homeowner was instructed he was not to have more than two people on the platform at one time and he was to operate the lift only on level ground. Other than those warnings, and some basic instructions on the use of the boom lift controls, he received no other safety instructions for the lift. He was able to use the lift safely for a period of time until the branches continued to increase the load on the platform. When the additional weight of the branches exceeded the tipping point the lift, it proceeded to tip over. The subject lift was equipped with a tilt alarm warning system, which appeared to be operational. Reports of responders following the fall indicated hearing a buzzer and seeing the tip over warning lamp lit on the lift.
The tip over warning system is designed to detect a change in the angle of the chassis and warn of an impending tip over. Since this tip over was caused by the addition of weight to the platform, it did not gradually approach the tipping point. This made the tip over warning system ineffective. When the last branch’s weight was transferred from the tree to the platform rail, the tip over occurred rapidly.
Additionally, the homeowner was not wearing a fall protection harness and was not secured to the lift. When the lift tipped and struck the house, he was ejected from the platform and fell to the ground. The homeowner testified he was instructed not to exceed two people in the basket; however, was not supplied with, or told, he needed any fall protection equipment. He further; testified he did not realize the attachment of the limbs would create instability to the lift.
Result: Case settled with the rental company based on their failure to provide adequate instructions on use of the lift, failure to provide any type of fall protection, and failure to advise of the need for fall protection when operating the lift.
John R. Yannaccone, PE, Senior Mechanical Engineer with DJS Associates, can be reached via email at experts@forensicDJS.com or via phone at 215-659-2010.