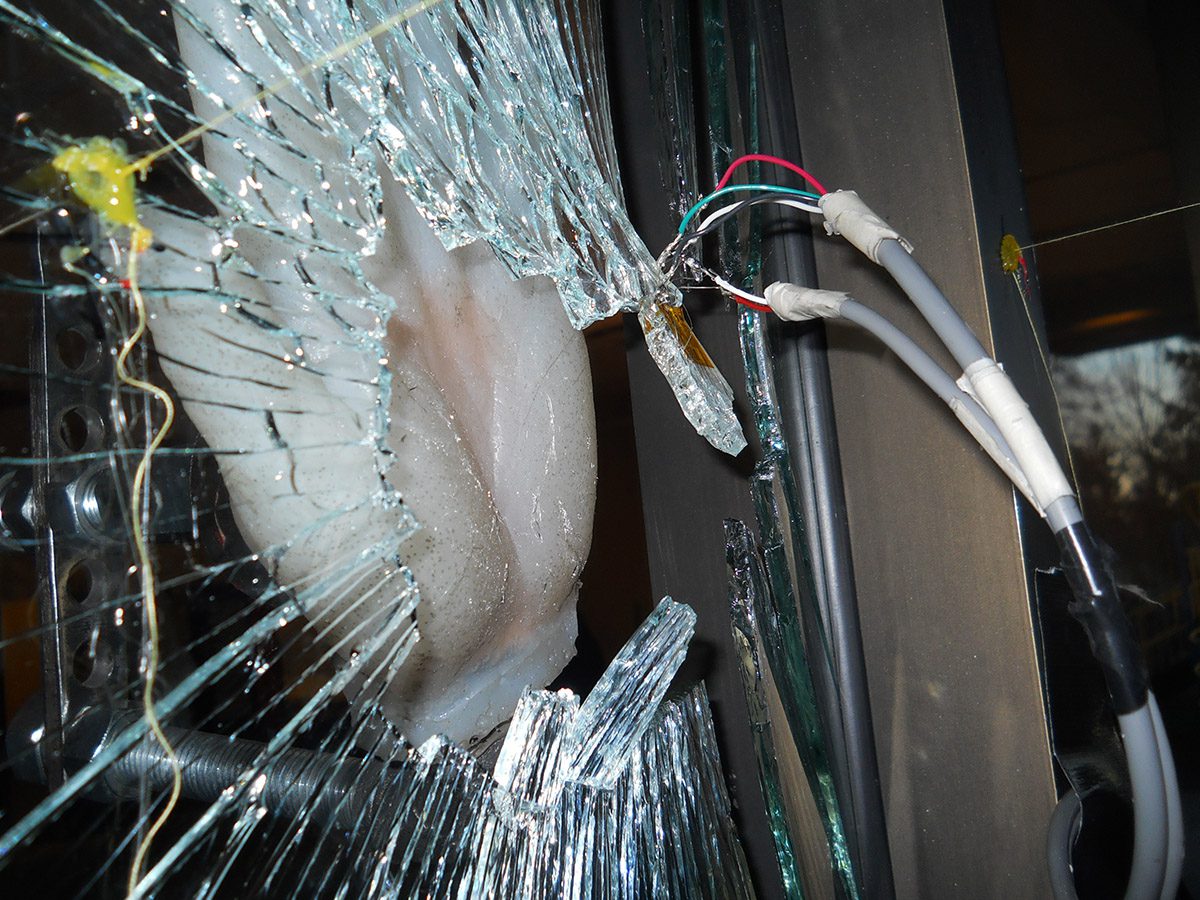 Brandon Erickson, P.E., S.E., Structural Engineer
Case Synopsis: The plaintiff, a teenage boy, was preparing for practice with his high school wrestling team when he suffered a serious injury to his arm. The injury occurred while he and his teammates were moving wrestling mats, which were rolled and stacked in the school cafeteria when not in use. In the course of endeavoring to move the top-most rolled mat, the plaintiff’s arm broke through one of the adjacent windows causing permanent damage to his arm.
Expert Analysis: In his deposition the plaintiff claimed to have only “touched” the glass window, which then reportedly shattered and broke, allowing his arm to be cut on the shards of glass as it passed through the plane of the broken window. An examination of the window wall revealed that the glass used in the windows was annealed, not tempered glass (often referred to as safety glass). Plaintiff’s counsel argued the presence of safety glass would have prevented injury to his client. The school’s defense counsel argued that notwithstanding the presence of annealed glass, the window would not have broken under the conditions described by the plaintiff, suggesting that instead the plaintiff was “roughhousing” while leveraged against the window to move the mat. Defense counsel requested a structural engineering analysis of the window system to quantify the force required to cause the glass panes to break.
Fortunately, the remaining original windows in the cafeteria wall were still intact and available for diagnostic testing. A custom-designed and constructed testing mechanism was conceived and employed to quantify the breaking strength of the windows. All elements were precisely replicated to the same conditions that occurred during the incident, including a prosthetic hand and testing apparatus to move it with similar force and angle. Prior to conducting the physical tests on the windows, engineering calculations were performed to predict the force at which the windows would break. The calculations were based upon the material properties of the glass chards collected from the broken window, which was deemed identical to the unbroken windows that were tested. These calculations served as a means of comparison with the forthcoming test data, and aided in the development of the testing mechanism to ensure it was capable of delivering sufficient force to the windows.
Results: All of the tested windows broke under induced loads in excess of 400 lbs. The test data were very consistent, with all of the test results within 10% of the average. The predictive engineering calculations agreed well the actual test data, lending further credibility to the test results. Armed with this information defense counsel successfully argued that the plaintiff did not merely touch the window, as claimed, but instead was roughhousing when moving the mats. The plaintiff’s counsel argued that the test data should be discarded because the one window that broke and led to the plaintiff’s injury suffered from a defect in the glass, lowering its breaking strength compared to the other windows that did not suffer from the same defect. A review of photos of the window before it broke and the glass chards from the broken window revealed that no such defect existed and that the broken window was substantially identical to the tested windows, all of which were free of the alleged defects. The school was able to favorably settle the case based upon the data produced by the engineering analysis.
Opinion: The key to this case was the development of a reliable, customized and defensible testing program. All of the tests were filmed and conducted with plaintiff counsel and counsel’s experts present; the resulting videos and test procedures were heavily scrutinized, as were the corresponding engineering calculations. When the validity of the test results and calculations could not be legitimately questioned, counsel was forced to unsuccessfully allege material defects. While the plaintiff’s injuries are unfortunate, they were a result of the plaintiff’s actions and not exclusively a consequence of the school’s negligence, as alleged.
Brandon Erickson, P.E., S.E., Structural Engineer is an outside consultant for DJS Associates, Inc., can be reached via email at experts@forensicDJS.com or via phone at 215-659-2010.