Timothy R. Primrose, Mobile Forensic Analyst
There are approximately three billion smartphone users worldwide. Smartphones can provide users with turn by turn directions to a given destination via applications such as Apple Maps, Google Maps, Waze, and others. When data is forensically extracted from a smartphone that used one of these applications, a list of GPS coordinates can be produced that will illustrate the exact route the cell phone user/vehicle operator took.
A recent data extraction conducted on an Apple iPhone 8 showed that the Apple Maps application was activated for a trip, which marked GPS coordinates every 1 to 4 seconds. Data from the same device, and it’s *Knowledge C database, provided details of when the phone was unlocked and when the Uber application was opened.
Based on the extracted GPS data, timestamps of the device’s location were plotted as it traveled from a bar to the user’s house. It was determined that the user was in the bar’s parking lot when they ordered the Uber around 23:06:35, the earliest recorded timestamp. The Uber driver picked up their passenger and left the parking lot at 23:08:23. The passenger arrived at their home at 23:15:56.

This data can be used to map a person’s whereabouts at a given time, the route they traveled, or provide the time they arrived at their destination.. Analyzing GPS coordinates over a distance with corresponding timestamps can be used to calculate the speed that a vehicle was traveling. The images below include plotted GPS points from the same Uber trip displayed above. The numbers at each coordinate indicate the vehicle’s speed from each previous coordinate.

In the below image, note the vehicle’s speed as it moves from the left side of the image to the intersection where it proceeds to make a right turn. The vehicle’s braking and acceleration speeds were able to be calculated. 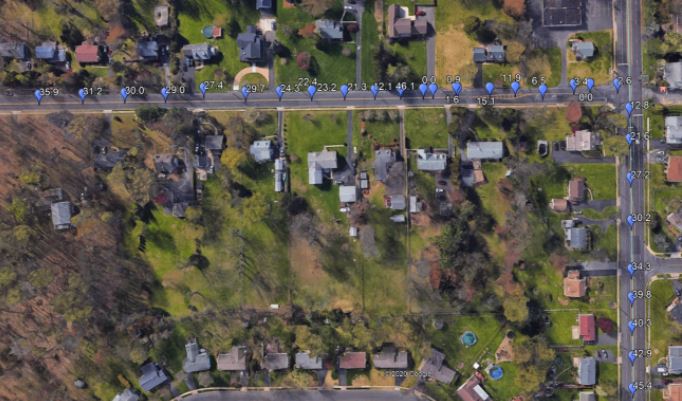 *Knowledge C- A database that retains mobile device events such as screen lock status, device orientation, application installations, and battery usage.
Timothy R. Primrose, Mobile Forensic Analyst with DJS Associates, Inc., can be reached via email at experts@forensicDJS.com or via phone at 215-659-2010.