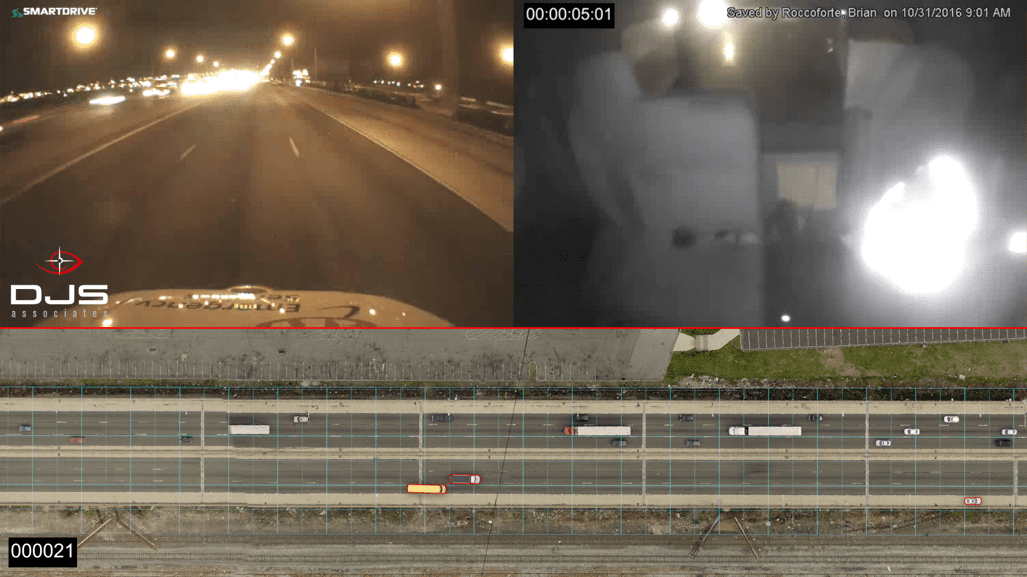 Justin P. Schorr, Ph.D, Principal Collision Reconstruction / Transportation Engineer ::::
A collision occurred when a school bus moved from the right lane of a limited access highway onto the rightside shoulder and contacted a disabled vehicle. It was dark and the disabled vehicle on the shoulder was not illuminated. The operator of the school bus testified that a tow truck located in the lane to his left executed a lane change, forcing him off the roadway and onto the shoulder into the disabled vehicle. The operator of the tow truck testified that the disabled vehicle was his intended “pickup,” but as he went to move from the center lane to the right lane to access the disabled vehicle, the school bus was trying to squeeze by him by passing him on the right, resulting in the collision.
Two forms of event data were available for analysis – video from the tow truck and engine control module data from both the tow truck and the bus. This data allowed for an accurate plotting of the speed of both vehicles prior to and at the time of the incident. Since the vehicles occupied the same place at the same time during the collision (i.e. the tow truck was touching the bus), the event data could be correlated such that their relative positions leading up to the collision could be plotted to scale. The video data also included a rearview camera making it so the position of the bus in the right lane as it approached the tow truck (which was initially in the center lane) could be seen. This data confirmed the independent correlation and plotting of the speed data from each vehicle.
The plotted event data from both vehicles showed that in the last 15 seconds prior to the collision the bus speed never varied more than two miles per hour. While the determination of what is “road rage” is not the province of the engineer, the event data allowed the bus operator to argue that there were no wild acceleration/decelerations that are typically associated with aggressive driving. The bus operator also argued that the speeds of both vehicles at the time of the collision (in the mid 60 miles per hour range) was not consistent with the tow truck slowing to access the disabled vehicle.
Finally, the bus operator argued that the tow truck operator could have seen the bus prior to and while he executed his lane change and by changing lanes when he did, the tow truck operator created the hazard that led to the collision.
Justin P. Schorr, Ph.D, Principal Collision Reconstruction / Transportation Engineer with DJS Associates, can be reached via email at experts@forensicDJS.com or via phone at 215-659-2010.