James R. Schmidt, Jr., BSME, Senior Collision Reconstruction Engineer
Recently, I was involved in a non-deployment crash while returning home from my parents’ house. Two-lane rural roadway. Nighttime, dry, clear conditions. No street lighting. Dark lighting conditions. And when I say it was dark, I mean it was dark … you weren’t seeing anything other than what was visible in your headlight range.
As I recall, I was cruising along at 50 mph, when a deer ran out in front of me. It came from my left, across the opposing lane of travel, and into my lane in a flash. 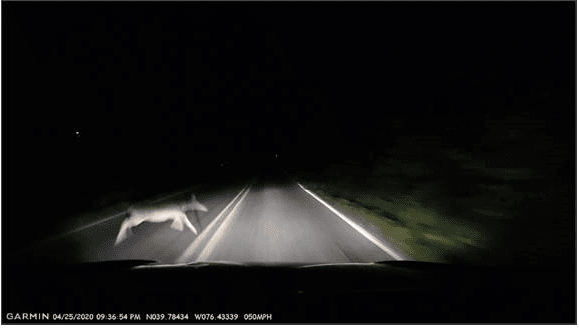 Being a collision reconstruction engineer, I have a dashcam in my vehicle. I also have a portable GPS. Given the jolt I felt upon impact, I suspected that a non-deployment event may have been recorded by my vehicle’s event data recorder (EDR). The dashcam recorded the event, including GPS coordinates and GPS speed. GPS coordinate and speed data were also stored in my portable GPS. And, as suspected, my vehicle’s EDR recorded a non-deployment event as a result of the crash.
From all data sources (dashcam, portable GPS, EDR), I was traveling at about 50 mph, consistent with my memory. Here’s a still image from my dashcam from just prior to impact: 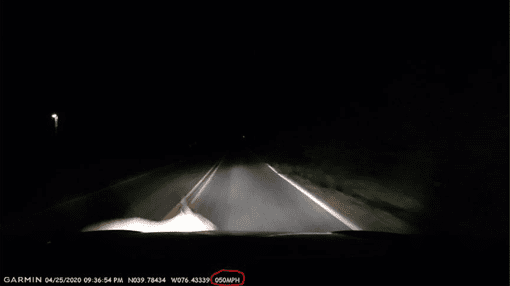 And here’s a snippet of the event data recorded by my vehicle, including 4.5 seconds of pre-crash data in this instance: 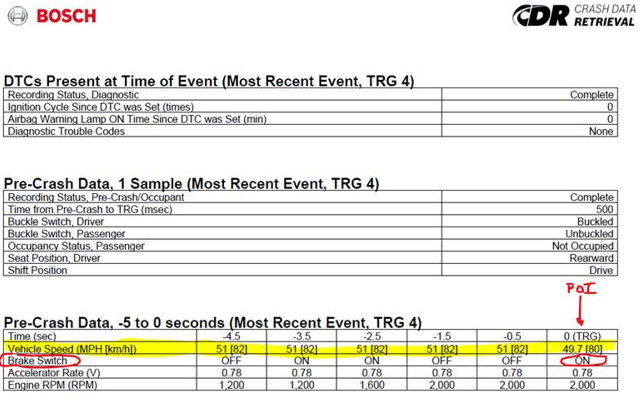 It is very interesting to us reconstruction engineers to see that I “got on the brakes” before this impact. Why is this interesting? Because, the deer was only visible for about 1 second prior to impact and it was on the roadway for even less time than that. Here’s a still image from 1.0 seconds prior to impact: 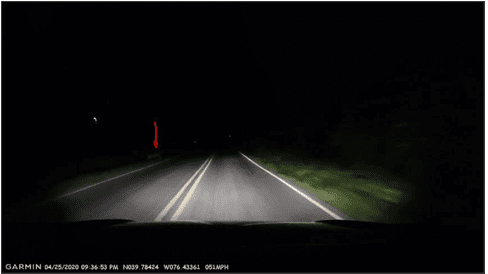 Typically, a 1.5 second perception-reaction time (PRT) applies during daytime lighting conditions, and a longer PRT applies for nighttime lighting conditions. In this case, the deer was on the roadway and visible as a hazard for less than 1 second, yet I was able to perceive, react, get on the brakes, and reduce my travel speed slightly before impact … a PRT of less than 1 second at night! Now that’s impressive, if I do say so myself!
The event data shows that I was also on the brakes a few seconds earlier (+/-). Looking back at the dashcam video, it was evident that I was braking in response to an object in the road visible in my headlight range in my lane of travel at/around that timeframe. The image below is from 3.5 seconds prior to impact with the deer: 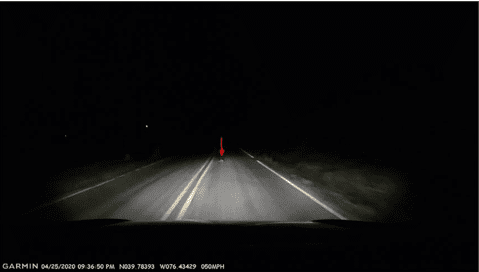 And wouldn’t you know it, I cleared the object in the road, which happened to be another animal that didn’t survive its trip across the street, at about 2.5 seconds prior to the deer impact! Brakes on for deceased animal in the road, then brakes off. Had I only known!
This is what I consider a pretty good “once-over” of a case. Lots of data to work with and there’s no stopping a collision reconstruction engineer from working on a case, even if it is his own personal crash and he, I mean I, am doing it just for fun!
James R. Schmidt, Jr., BSME, Senior Collision Reconstruction Engineer with DJS Associates, Inc., can be reached via email at experts@forensicDJS.com or via phone at 215-659-2010.