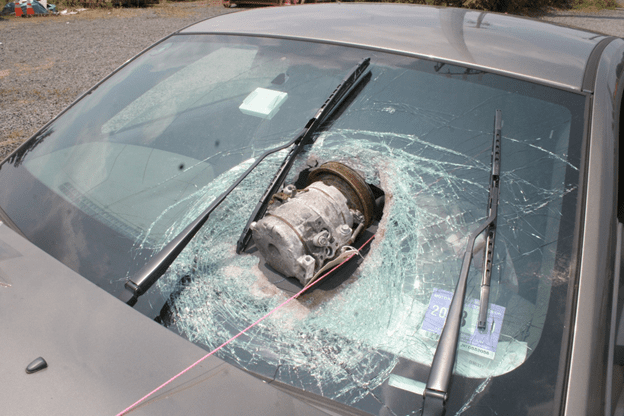 John R. Yannaccone, P.E., Sr. Mechanical Engineer
Case Description: Late one evening, as the plaintiff was crossing a bridge on his drive home, another vehicle entered his travel lane and impacted the front of his vehicle. The police report indicated the encroaching vehicle had impacted the bridge and rotated as it crossed the centerline prior to striking the plaintiff’s vehicle. The police report also indicated that the plaintiff was unbelted and sustained serious head injuries when his head passed through the windshield. The defendant in the case alleged the plaintiff’s failure to wear his seatbelt substantially contributed to his serious injuries.
Engineering Analysis: Scene photographs showed a hole through the windshield approximately 10 by 10 inches directly in front of the driver. They also showed a bloody piece of windshield glass, of approximately the same size, lying on the passenger front seat of the plaintiff’s vehicle. Medical records for the driver indicated he had severe facial fractures and small pieces of glass embedded in his face. This injury pattern was unusual, as head contact with a windshield does not typically cause the deep fractures the plaintiff sustained. Windshields are designed to deform when impacted, and generally do not result in forces on the occupant sufficient enough to cause the severe fractures sustained. The geometry of the car would also make it difficult for a driver to get past the steering wheel and contact the windshield, let alone pass through it, as low as the hole was located. The deployment of the driver’s airbag would only further reduce the potential for head contact with the bottom of the windshield. 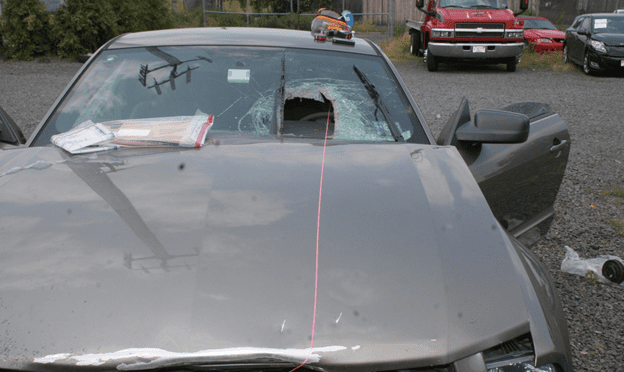 Inspection of the vehicle resulted in several unusual findings. The upper rim of the steering wheel was deformed toward the driver, rather than towards the dashboard, as typically occurs when it is contacted by an occupant. There was damage to the headliner over the driver’s position with an outward dent in the roof. There were unusual scrapes across the hood of the vehicle and the instrument panel directly in front of the driver.
While at the inspection, there was a car part found on the rear seat; an air conditioner compressor which had broken off, rather than unbolted from, the vehicle. Finding such a part in a damaged vehicle is not unusual as debris is frequently placed inside vehicles by responders during cleanup of the scene. Research into the part showed it did not belong to plaintiff’s vehicle, but the defendant’s vehicle, which crossed into his lane. The scene photographs of the striking vehicle showed its air conditioning lines were hanging out of the grill area. When the compressor was compared to the hood scrapes and the hole in the windshield, it was clear the defendant’s compressor caused the damage to the plaintiff’s vehicle.
Engineer’s Findings: Based on the available evidence, it was determined that the impact with the bridge separated the air conditioner compressor from the engine of the defendant’s car. When the two vehicles collided, the compressor scraped the hood of the plaintiff’s car, passed through the windshield, scraped the top of the dash, and impacted the top rim of the steering wheel before impacting the plaintiff’s face. After striking the plaintiff, the compressor was deflected upward where it contacted the headliner, causing the dent in the roof and then fell into the rear seat where it was found. Based on the findings from this inspection, plaintiff’s attorney investigated issues related to the way the component was mounted and added additional parties to the case.
As for the initial question, physical evidence found at the inspection was insufficient to determine if the plaintiff was wearing the seatbelt at the time of the crash. It was further determined use of the seatbelt would not have changed the injuries, which were caused by the compressor striking him in the face.
Outcome: Prior to trial, a settlement was reached with all defendants in this case.
John R. Yannaccone, P.E., Sr. Mechanical Engineer with DJS Associates, Inc., can be reached via email at experts@forensicDJS.com or via phone at 215-659-2010.